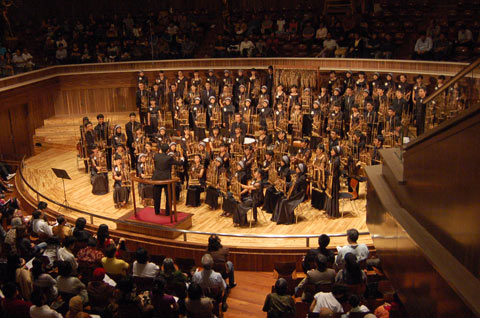 KPA3 is a student-based musical group based in Bandung, Indonesia, focusing on angklung tradition. Angklung is an Indonesian traditional instrument made from bamboo, with distinct timbre of eastern enchantment. KPA3 for almost 30 years has been a pioneer in angklung musical development, ranging from introducing new musical genre to be performed, to pioneering angklung orchestration, thus rendering our group as “the angklung orchestra”.
For the past 10 years, KPA3 has participated in numerous international festivals, both folklore and musical festival, e.g. Aberdeen International Youth Festival, International Folklore Festival Gannat France, International Festival of Mountain Folklore in Zakopane (with Gold Medal for musician category, silver medal for singer, and audience prize), and held a concert and workshop in ISME 2008 in Bologna, as well as being the resident champion for many national angklung festivals in Indonesia. Our annual concerts have also become the barometer of angklung musical development in Indonesia, as we’re striving to be the frontline in both preserving our national heritage and advancing it as one of Indonesian contribution to musical world.

Our current focus is to bridge the eastern musical heritage and western cultural treasure as we believe that angklung has the capacity to cater the eastern culture’s enchantment with the richness of western musical knowledge. Angklung orchestra’s character that has similar nature with string orchestra has a rich ability to give similar flavor without leaving its signature musical character. Currently, we’re the leading angklung orchestra on performing classical repertoires, and giving the angklung music a new touch of performance that can bring the tradition into a new standard. 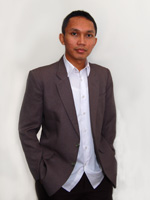 Doctor Margono started his conducting experience in KPA3 in 2001. As many Indonesian conductors, Djiwa learned his musical acumen from a “hands on” experience. In 2005, Djiwa has been appointed as KPA3´s first conductor to lead the group through various festivals, competitions, and performance, both with national and international exposure. His distinct characteristic, that defined him with other KPA3’s rehearsal masters, is focus on meticulous details. His sharpness attention on interpretation has gained him the reputation of one of the best conductors in the “Angklung-World”. Apart from being the first conductor, he’s also the head of technical development in KPA3.