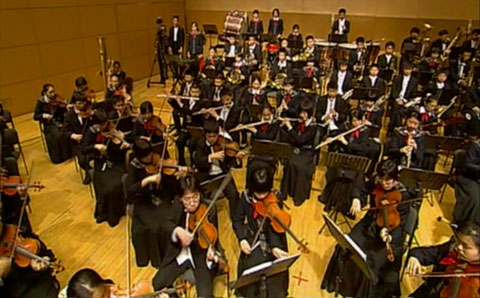 Beijing National Day School Symphony Orchestra was founded in 1987 with approximately 100 musicians. Since its founding, it was successful in numerous performances and competitions.
The orchestra once presented its own concert by the name of 4th Sound of Golden Sail Concert in the Beijing Music Hall and Zhongshan Park Music Hall respectively, which was broadcast in China by CCTV. Moreover, the performance of “100 times of Golden Sail Music Concert” and “China Summer of Symphonic Concert” were quite impressive and brought a lot of praise.
The orchestra has visited many places and countries such as Austria, Australia, France, Hongkong, and actively took part in music exchange programs with USA, Germany, Poland, Czech Public, and Japan. In 2004, they received the best performance prize at the European Youth Orchestra Festival in France. 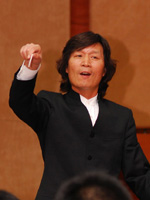 Fengde Liu, the famous conductor who graduated from Central Conservatory of Music, was a student of the famous conductor and educationist Dr. Feili Huang. He once took part in a training course lectured by the famous musician Herbert Zipper in the University of California in America.
Fengde Liu is a member of Chinese Musicians Association, a member of Chinese Conductor Academy, the expert of Beijing Golden Sail Art Group supervising committee, the art instructor of Chinese Opera and Pantomime Symphony Orchestra and the permanent visiting conductor.
Mr. Fengde Liu is an excellent conductor who is very active in the musical world both in China and abroad. He has conducted many musical works in different fields of different times cooperated with China National Symphony Orchestra(CNSO), China National Symphony Chorus Central Opera Symphony Orchestra and other orchestra from Beijing , Tianjin, Shenzhen, Zhejiang and Dalian. He has conducted the famous opera “ La Traviata” and has also conducted a Chinese ethical opera “Jiangjie”. He has been to America to cooperate with the Los Angeles Chinese Chorale (LACC) by conducting the “The Creation” of Haydn. The way of his conducting is quite charming and impressive.
For more than ten years, Mr. Fengde Liu has been the permanent conductor and art supervisor of Tsing Hua Symphony Orchestra. Under his guidance, they won the special award in the Tokyo University Festival Orchestra in 2002. Moreover, they also won the first prize in Chinese National University Art Festival. In July, 2004, Mr. Fengde Liu performed in Vienna’s Golden Hall as the conductor of Beijing Golden Sail Symphonic Orchestra and won the golden prize of the 34th International Youth Symphony Competition.
He had been invited twice to attend the European Union of Music Competition for Youth in 2005 and 2007 to conduct the united orchestra composed by artists from Russia, Poland, Spain, France and Portugal. He had also been invited to go to America, Germany, Korea, Hongkong and Macao to do the intercommunion performance and was warmly welcomed and highly praised.