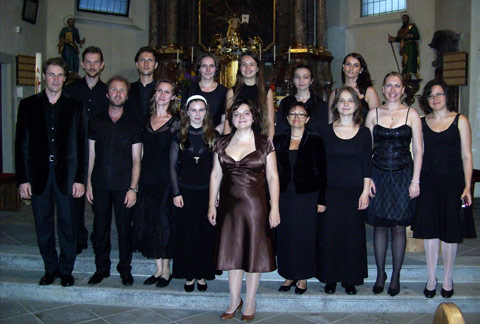 The choir of St. Nikolaus Cathedral in Vienna, led by regent Tatiana Scherba, was established in September 2007 and was originally composed largely of students from Vienna`s music universities, whose enthusiasm and motivation contributed to the rapid and qualitative growth of the multinational team.
The main role of the choir is to perform during the church services. Since this is not a full time job for the chorists, the staffing of the choir is not fixed.
The choir performs exclusively liturgical music of Russian composers of the 17th to the 21st century. In addition to the church services, the choir started performing at small concerts first in the church and was later invited to take part in the Russian Christmas concert in the Radiokulturhaus of the Austrian Broadcasting Corporation, at the opening ceremony of the icons exhibition at the St. Stephan`s museum, and in the House of Science, at the 25th Chopin`s festival in August 2009.
The choir regularly performs at the Long Night of the Churches in Vienna, which is of broad interest to the Austrian public. The recent performance of the choir on 02.06.10 took place in the Radiokulturhaus of the Austrian Broadcasting Corporation at the Shostakovich memorial evening “Hören sie doch meine musik, da ist alles gesagt” (Listen to my music, there everything is said) 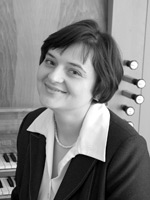 Tatiana Stcherba is a musician from Minsk, Belarussia, who graduated with honours from the Moscow Conservatorium on musicology and organ classes. She studied in Germany with Professor C. Schnorr in Freiburg and graduated from the Vienna University of Music and Performing Arts organ class of Professor M. Haselboeck, both with honours. As organist she participates in many concerts, including concerts in the Augustine church and in many other Viennese, German and other European churches.
During her studies in the Moscow Conservatorium she participated in different church choirs as a singer and later as a regent. Also she was a regent of the church choir in Freiburg in Germany and since 2007 she is a regent of the choir of the St. Nicholas Cathedral in Vienna.