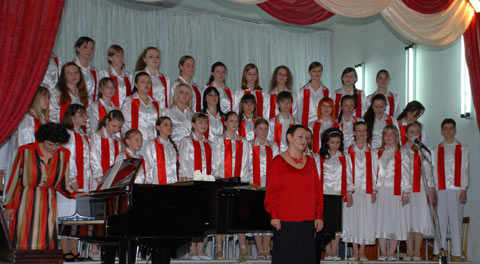 The Ensemble was established in 1995 and is the awardee of the regional festivals “The Source of the Young Talents”, regional contest of the young composers “Pentatone”.
In 2005 the choir became the first degree awardee at the 5th All-Ukrainian Festival of children choir singing “The Golden Orpheus”; in 2007 the choir has won the first prize at the international festival-competition “The Southern Palmyra” in the city of Odessa.
In 2008 the Ensemble took part in the 10th International children-junior festival “Moscow is on” and was awarded with the 1st degree Diploma at the main contest, with the 2nd degree Diploma for the performance of the church music, with the 3rd degree Diploma for the performance of the Orthodox music.
In 2008 the Ensemble got the rank of “Prime”. In the repertoire of the choir are the works of classical composers, sacred songs, the arrangements of the Ukrainian folk songs and modern choral music.
The Ensemble takes an active part in the municipal concerts.
The concertmaster Iryna Belyaeva is the graduate of the Kyiv Music Academy; the concertmaster Sergey Kadykov is the student of the Odessa State by A.V. Nezhdanova Music Academy.
A great deal of work is done by the student assistants Elena Cherepukhina, Kseniya Michalnyuk, Aleksandra Krachun. 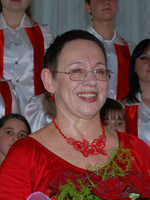 The choir director is the graduate of the Odessa State by A.V. Nezhdanova Music Academy, head teacher of the highest category, Ganna Gatsuk.