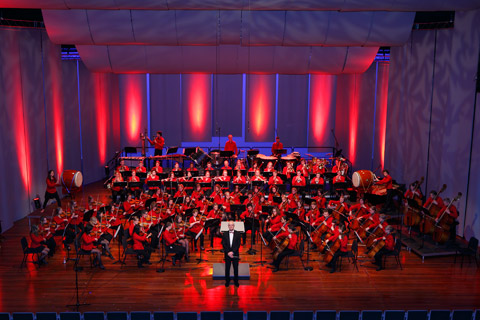 Almere is a rather new city, founded in 1976 on the bottom of the reclaimed “Zuiderzee”. At the beginning you would only find houses for a few hundred residents there. The rest of the polder was empty land. Over the years the new city of Almere grew and got more and more facilities and in 1982 a music school was founded. Available lessons were still limited, but with the growth of the city came a greater variety of art education, resulting in 1987 in the foundation of a youth orchestra with fifteen musicians from the Music School Almere. With the growth of Almere, this youth orchestra grew in size as well as in quality. Now, in 2013, Almere has almost 200.000 residents, a large Art Centre and the orchestra consists of 85 musicians.

The orchestra grew to become a full symphonic orchestra. This was the reason to change the name to “Almeers Jeugd Symfonie Orkest”, Almere’s Youth Symphonic Orchestra at their 10th Anniversary. The orchestra consists of 85 musicians, age 14 years and older. Their repertoire contains classical music, but also musical and film music. Next to the now traditional Matinee concert every year in February, the orchestra also gives eight concerts in various locations throughout the year.

Highlights:
• Concert trips to Prague, Aalborg (DK), Paris, Bruges, Barcelona and Berlin.
• Each year the orchestra provides the New Year Concert for the municipality of Almere.
• Both in 2006 and 2011 the AJSO obtained second place at the National Youth Symphony Orchestra Concourse.
• In 2006 the orchestra played for Queen Beatrix during her visit to the city of Almere.
• In 2012 the orchestra contributed to a TV program about life in prison, broadcasted on national television. They also gave a concert in this prison which was a very special experience for the musicians.
• In 2013 the AJSO celebrated its 25th anniversary with two sold out concerts (1500 visitors).
• The next highlight in this jubilee year will be our participation at the Summa Cum Laude Festival.

Young talent has a chance to develop itself at the AJSO by support of Art Centre “De Kunstlinie” and local authorities. The existence of AJSO is secured in a continuing orchestra line, starting with a strings class, an orchestra class, the Junior Orchestra Almere and the final step, AJSO as biggest orchestra. Most members of the orchestra don’t aspire to have a professional career in music; the orchestra is for them a much loved hobby. But over the years also members studied at the conservatory and left the AJSO to build up a career in music.

Mrs. Jorritsma-Lebbink, the mayor of Almere, is Patroness of the orchestra. 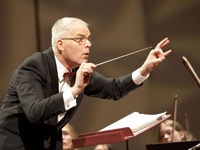 Hans Welle studied musical direction and piano at the conservatorium in Hilversum with saxophone as minor.
He has been the conductor of the AJSO as from the foundation in 1987 and the inspiring force behind the growth and development of the orchestra. He also leads the Junior Orchestra Almere (JOA) and the orchestra class of the Art Centre. In addition to the orchestra’s of the “Kunstlinie”, Hans Welle conducts several other orchestras and is orchestrator and conductor for several musical productions. He’s also connected to the “Learning Orchestra” in Amsterdam, a nationwide project for Elementary school students. Here they can get a taste of orchestra music and the instruments that are played.
In 2012 Hans received the Bonifatius pin, a decoration from the municipality of Almere for his huge contribution to the cultural life in Almere.