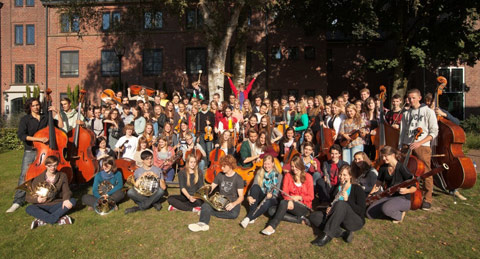 The Euregio Youth Orchestra(EYO) has been founded in the year 1986. Several managing directors of educational centres for music in the provinces Noord-Brabant (Netherlands) and Flanders (Belgium) found it as a way to give talented youngsters a platform to experience performances in concerts on stage.
In recent years the EYO has won a lot of prices like the “Visser Neerlandiaprijs” the “ ChappinCultuurprijs”, etc. Also the EYO won in 2011 the youth price of the most promising Orchestra at the contest of youth orchestras hold in “de Doelen” in Rotterdam. During the Christmas holiday in 2011 the EYO was invited by the Chinese government for a tour around Shanghai. Over 5 concerts were given and the staff is convinced EYO will be invited again.
Regularly the EYO performs with famous soloists like Paul van Kemenade, Erwin Deleux, CarelKraayenhof and also Candy Dulfer. Soloists from the classical as well as the popular school. Ever since the EYO exists for more than 25 years and consist of 90 members/kids in the age between 13 and 24 years old. The first conductor was Mr Edmond Saveniers and the present conductor is Mr Hans Casteleyn.
Each month there is a rehearsal of a weekend time where the members come together in the “Jan van Besouwhuis” in Goirle. They will stay there overnight and in general in this rehearsal weekend there are also concerts planned. Apart from the weekends there is yearly an intensive training in the week between Christmas and New year’s eve, also with a final concert.
Every year about 20% members will leave the Orchestra by means of study elsewhere or because of the age(max age 24 yrs). This means new members are needed and therefore there are auditions planned in the period of May/ June. Talented youngster are selected by the local music schools and invited to play for our staff members. Our staff will check their musical level and whether they fit into the orchestra. The members that has left the EYO have various destinations. Some are studying on universities in a complete different direction and some end in famous Orchestra’s like Royal Concertgebouw Orchestra,Metropole Orchestra, or Brabants Orchestra. And also some members start a solo career like LiesbethBaelus( former Violinist and leader). She recently starts a study in Vienna.
As the reader will understand the EYO is a versatile Orchestra and is used to play classical music(Mahler) as well as they can perform modern/film music ( Schindlers List, Star wars). It is a pleasure to hear the EYO playing with all that enthusiastic youngsters. 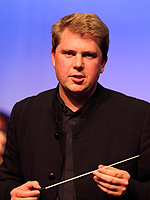 Hans Casteleyn graduated with honours in 1996 as a Master in Music, option piano, at the famous Lemmens Institute (Leuven, Belgium). In the same year he also received his teaching certificate cum laude. He finished these studies in 1999 as a Master in Conducting with honours as well as getting a degree in musical analysis, harmony, counterpoint and fugue.
He is the chief-conductor of the Euregio Youth Orchestra since 2002. Under his guidance, this orchestra has performed some highly valued concerts in Europe in collaboration with rockband ‘Krezip’ (The Netherlands), the ‘New Black Eagle Jazz Band’ (Boston, USA), the world famous saxophonist Candy Dulfer and bandoneonist Carel Kraaijenhof (both from the Netherlands). Together with the ‘Paul Van Kemenade Jazz Quintet’ the orchestra executed a few world premieres for ‘Jazz Quintet’ and symphonic orchestra. With the EYO, Hans won also three cultural prices: Price of the ‘Soetelievefonds’, the ‘Van Udenhout-Chappin’ Price and the famous international ‘Visser-Neerlandia’ Price.
On these gala concerts he conducted the Symphony no.1 ‘Titan’ of Gustav Mahler.
Since 2004, he also is the chief-conductor of the Symphonic ‘Alumni’ Orchestra from the famous University of Leuven. With this orchestra he conducted more than 40 concerts in Belgium and China with several different programs, going from famous symphonies, great classical concertos and choral works. In 2015 Hans will take this orchestra on an extended tour in South of Africa.
In 2009/2010 he conducted several concerts with the professional Baroque Orchestra and Choir ‘Vox amicorum’ on festivals in Brussels, Paris and Dordogne with music from Bach, Pergolesi and the famous ‘Messiah’ (Haendel).
Hans conducts many concerts with many world-class soloists from the international classical music scene. He performed in famous concert-halls with people as Anneleen Lenaerts (solo harpist ‘Wiener Philharmoniker’), Johan Van Iersel (solo cellist ‘Royal Concertgebouw Orchestra Amsterdam’), Marije Grevink (first violin ‘Symfonieorkester des Bayerischen Rundfunks’), Anne Cambier (laureate ‘Queen Elisabeth Competition’), Timora Rosler (famous cellist from Israel), Ivo Hadermann (solo horn ‘National Orchestra of Belgium’), Pauline Oostenrijk (solo oboist ‘Residentie Orchestra Den Haag’) among many others.
Conducting orchestras brought him all over the world. He gave concerts with different orchestras in many European countries, but also outside Europe in the United States of America, Russia and three extended tours in China. In 2013 he is invited in China again to conduct the professional Symphony Orchestra of Qingdao.
Hans conducted several world-premieres, his repertoire is very expansive and includes works of most classical renowned composers. He also made several classical recordings and is often asked as a guest conductor.