The Naissus Youth Philharmony of Nish

The Statute of the Youth Philharmony Orchestra Naissus was proclaimed by the Initial Assembly held on 27.10.2010.
The Assembly is presided by Mr. Slavoljub Vlajkovic.
The Assembly also established the Managing Board:
- Mr. Zoran Andric, the Chairman, founder and Chief Conductor
- Prof. Dr. Dragan Stanimirovic, The General Manager (In memoriam)
- Srdjan Savic, The new General Manager
- Maestro Dejan Savic, Conductor & Art Manager
The Youth Philharmony "Naissus" started to work on November 1st , 2010 in the lobby of the town house, thanks to the understanding and support of city leaders, and continues under the watchful eye of Nis Mayor and honorary president of the Philharmonic, Prof. Dr. Zoran Perisic.

The Philharmony commenced working on 01.11.2010 at the city hall, with utmost understanding and support of the Mayor of the City of Nish, Mr. Milos Simonovic, who is also the Honorary Chairman of the Philharmony.
The Youth Philharmony had their first performance during the traditional New Year's Viennese Waltz Concert on 14.01.2011, an event which Maestro Andric has been organizing for 14 years. During that very first performance it was obvious that these young people had no stage fright and that they were facing bright future in the world of music. This opinion was expressed by everyone in the audience at the concert hall, and by all the members of the Vidin Philharmony, who also performed that night.
The Philharmony consists of young people aged 13-26 - pupils and students of various levels of music school as well as graduated students. The Philharmony held their first concert on the summer stage in Nish on the 7th of July in front of 2500 visitors.
The Youth Philharmony "Naissus", as the sole representative of Serbia and the Balkan countries, performed at the XIII Youth Philharmony Festival in Florence, receiving standing ovations for their subtle and profound performance which had not been heard recently according to the organizers. The following perfomance was on 12th of July in Pietrosanta, in the southwest of Italy, and after returning home, on Mediana Fest in Nish, on 22nd of July.
After a break, the Philharmony resumed working on 10th of September and celebrated their first anniversary with an international appearance in Sophia (Bulgaria), on 5th of November and soon after that with a concert in Leskovac (Serbia).
Another performance with the Vidin Philharmony (Bulgaria) was during the New Year's Concert on 5th of January 2012 which marked the beginning of huge preparations and rehearsals for the next season with a number of scheduled events:
- World Contest of Youth Orchestras YOUNG 2012 PRAGUE at the end of March. Won GOLD MEDAL
- On the 21st of July WORLD MUSIC DAY 2012, second and premiere concert with the program of Dvorak - Symphony from the New World.
- Summer festival in Rome ESTATE MUSICALE ROMANA in August, with subsequent concert in Sorento, Naples and Bologna, and maybe in RAVELLO festival. 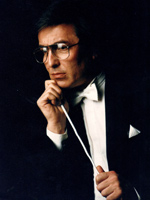 Zoran Andric (1955) graduated at the department for Composition and Conducting at Faculty of Music, Skopje, Macedonia. In 1983 he improved his techniques at the High School of Music in Graz (Prof. Milan Horvat). From 1984 to 1993 he worked as a professor of Chorus and Orchestra at Musical school "Petar Konjevic" in Belgrade. He also had very successful appearances with Children’s Chamber Orchestras and Choirs.
As a scholar of the Russian Government in 1986 he specialized for Opera-Symphonic Conducting at Conservatorium of Nikolaj Rimski Korsakof in Saint Petersburg, in class of Prof. doc. Rovilj Martinova. That time being he had his own authoric concert of opuses in performance of the most famous Russian artists and ensembles, as the only Yugoslav composer who presented his work in Russia after long time. He also conducted a Symphonic Orchestra playing his Piano concert no.1 and Symphonic Poema (1987).
Andric started composing in 1971. He has a lot of works done: Sonata Dramatica for piano, Suita for piano, Scherzo for piano, two String Quartets, Lastovo Vision for flute and piano, Midnight dreams for flute, 10 miniatures, Symphony no. 1, Symphonic poema, Oratorio, Concert for Piano and orchestra, Fantasy for orchestra, three compositions for chor, etc.
As conductor he had appearances with many orchestras: Symphony Orchestra RTS, Macedonian Youth Philharmony (as its establisher), Prishtina Symphony Orchestra, Titograd Symphony Orchestra, Mostar's Symphony Orchestra, Sophia Philharmony, Philharmonic orchestra from Vidin, Vrace, Russe, Plovdiv. He established chamber orchestra SORABIA in Belgrade, and KPGT orchestra in Nis.
He cooperated with the most famous solists: Stefan Milenkovic, Jovan Kolundzija, Flavio Kolombo (Italy), Karsten Grondal (Sweden), Romeo Smilkov (Bulgaria), Mona Mari Nok (America), Radmila Bakocevic, Jadranka Jovanovic, Katica Nikolic, Vera Royova (Russia), Uros Dojcinovic, Jasminka Stancul, Marina Arsenijevic,etc.
He is establisher and art director of International Festival of Music OLD GOLD in Nis, and also of revival of Traditional New Year's Concert from Vienna in Nis. He has 10 CD, and also LP-s and cassettes, and he made some quality and lasting tapes for musical production of RTS.
He is also establisher of Chamber Choir of Nis, which consists of the best and the most experienced soloists in Nis in 1982. He was nominated for October prize of city Nis. He has a status of independent artist and is owner of Concert Agency "And art music", witch performs only art music and great vocal-instrumental opuses.
November 2010 established the Youth Philharmonic orchestra "Naissus" of Nish with which he works with great success to this day.