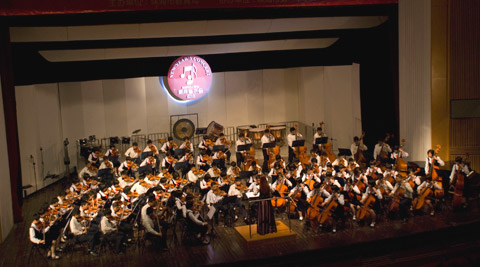 Zhuhai Wenyuan Middle School Cerulean Youth String Orchestra was established in 2004. Under the leadership of the conductor Guo Yang, the string orchestra has been undergoing a steady development. At the very beginning, there are only about 10 members, but in 2006 our orchestra, on behalf of Zhuhai, won the gold prize on the 2nd Chinese String Music Festival held in Macao. It was just two years past since the establishment.
In 2006, the Cerulean Youth String Orchestra grew up into an independent junior middle school youth string orchestra. The members are from Year 7-9. What’s more, most of them have never learned to play the violin before they came to our orchestra. However, under the teaching of Ms. Guo Yang, they can easily and quickly get the hang of the basic performance skills of playing the violin and those who learn quickly are the main part of the orchestra. The number of the steady members of the orchestra keeps at 60.
In 2008, the orchestra was equipped with more necessary instruments, which made the orchestra more perfect. The song PALLADIO we played on Zhuhai Middle School Students Art Performance won the gold award. and for two consecutive years from 2009 the orchestra won the gold award in Guangdong Middle School Students Musical Instruments Competition.
In addition, it is our honor to stand in Vienna Golden Hall to take part in The International Youth Music Festival Vienna 2012, and we are awarded a silver prize with our great effort.
Nowadays, the performing style of our orchestra is more varied, and the performing pieces of the orchestra are becoming larger at the range. Our orchestra is popular with all the audience and often invited to watch a lot of great celebrations and performances. 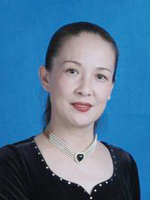