1965 Established
1976-1981 Gold prize at All Japan Band Competition (5 years in a row)
1984 Participate in the AICE Festival Vienna and received a Prize, followed by Concert Tour in Austria and Hungary
2003 Concert Tour in Austria
2004 Concert Tour in Taiwan
2005 Gold prize at World Music Contest Kerkrade (WMC)
2008 Participate in Taiwan Clinic / International Band and Orchestra Conference
2011 Invited as a Model Orchestra at WASBE 15th International Conference in Taiwan. Beside the above, we have regular concert twice a year, and participate regularly in All Japan High School Invitation Wind Band Conference, All Japan High School Brass Band Festival in Yokohama and East Japan School Band Convention. 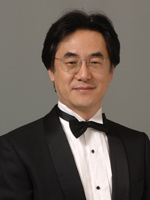 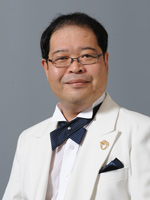 Laureate He Graduated Tokyo Collage of Music in 1985.
He has been active as a composer as well as Music arrangement since his student time. He arranged many Pop-music for Wind Orchestra, and these scores are published and played in many countries today.

Few of his arrangement works are as below:
G. Gershwin/Rhapsody in Blue, Beethoven/Symphony No. 5 & 9, Tchaikovsky/The Nutcracker, Brahms/Symphony No.1, Dukas/L’Apprenti Sorcier, KIra KIra, Soma Fantasy, Do-Re-Mi.
He arranged Opening Theme Music for WASBE 15th International Conference in Taiwan in 2011