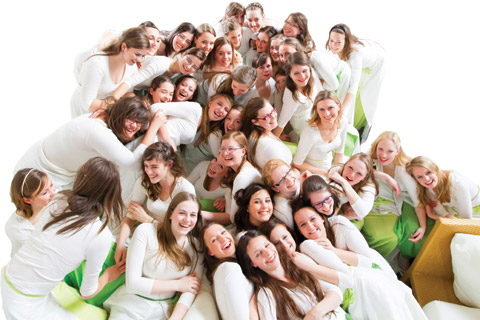 St. Stanislav’s Girls’ Choir is a student choir with forty to fortyfive singers between the ages of 15 and 19 who attend the second- to fourth- years of The Diocesan Classical Gymnasium in St. Stanislav’s Institution, Ljubljana, Slovenia. The choir fosters a very versatile repertoire – from classical choral music of various periods to vocal pop, Slovene folk songs and dances. They pride themselves in several premiere performances of original songs and arrangements of contemporary Slovene composers (Damijan Močnik, Ambrož Čopi and Tomaž Habe). In December 2010 they launched their first independent CD named Igraj kolce/Dance a little round dance and in november 2012 the ir secon one named Sončnica/The Sunflower.
In St. Stanislav’s Institution music activities and choral singing have always held a special focus, bearing in mind that they importantly contribute to the comprehensive development of a young person. Of all five choirs at the Diocesan Classical Gymnasium, the St. Stanislav’s Girls’ Choir has achieved the most outstanding results. They have been awarded a number of gold plaques, first place awards and special honors in national and international competitions. The choir has taken part in many respectable festivals. In 2009 it worked with the Swedish conductor Fred Sjøberg and became one of the five selected study choirs in the European Competition of Young Conductors. In the same year they performed in the concert to honour the twentieth anniversary of the World Youth Choir in Örebro, Sweden. The choir’s greatest success was winning the exclusive Euro radio competition Let the Peoples Sing in 2009 in Oslo, Norway, which ranks them among the most outstanding vocal ensembles in the world. Another prominent performance was an autumn 2011 appearance in Manchester, and in May 2012 they took part in the European Youth Choir festival in Basel, Switzerland, where the most prominent European youth choirs presently sing. 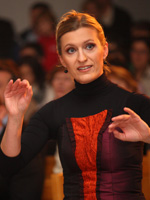 Helena Fojkar Zupančič received her formal solo-singing and pedagogical music education at the Academy of Music in Ljubljana, Slovenia. She furthered her skills through several solo-singing and conducting seminars in Slovenia and abroad. In her career she proved to be an excellent conductor of various choirs: she conducts the St. Stanislav’s Girls’ Choir, St. Nicolas Mixed Choir Litija, led the Slovene Children Choir in 2004, 2007, 2008 and 2009, and recorded and conducted concerts with the RTV Slovenia Chamber Choir in 2009-2011.
A number of gold plaques, first prizes, special awards and honours (for the choirs she conducts and for herself, as a conductor) serve as a proof of the excellence of her professional work. Most frequently the music reviews point out that her choirs excel in sophisticated vocal technique, in depth of knowledge of musical material, rich acoustics/tonality and original interpretation. Her latest triumphs include the St. Stanislav’s Girls’ Choir’s overall first place at the Eurovision competition (EBU) Let the Peoples sing in Oslo, Norway in 2009, and outstanding achievements with St. Nicolas Choir Litija, which won the Venezia in Musica 2011 competition in Italy and a golden plaque at the 2012 Slovene national competition Naša pesem/Our Song in Maribor. With both choirs she has recorded several prominent CDs, conducted concerts throughout Europe and accepted invitations to reputable music festivals. Having been proclaimed the best conductor in several national and international competitions, Helena Fojkar Zupančič is a sought-after and appreciated lecturer at conducting seminars and jury member in choir competitions in Slovenia and abroad.