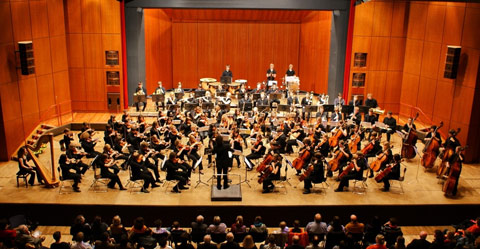 The Göppingen Youth Symphony Orchestra was founded in 1968. The orchestra offers the opportunity to rehearse and perform works of the symphonic repertoire for young musicians in an ambitious and demanding way. Approximately 100 young instrumentalists rehearse weekly and perform several public concerts each year. Especially talented young musicians may also be able to perform as a soloist with the orchestra. The Youth Symphony Orchestra is a part of the Göppingen School of Music in the state of Baden-Württemberg, Germany and a member of Jeunesses Musicales.
The Göppingen Youth Symphony Orchestra has been prize winner in numerous contests. Repeatedly the ensemble was rewarded first prize and presented on radio and television.
International relations, concert tours and exchange projects play an important role in the orchestral activities. Successfully the orchestra participated in important European festivals. Concert tours led it to Spain, Italy, Hungary, Norway, Latvia and Austria. The orchestra has given concerts in the Palau de la Musicá Barcelona, in the Theatre Clavé Tordera, in the City Hall of Budapest, in the Nidaros Dom Trondheim, in the Klosterneuburg Monastery, in the Palazzo Pitti Florence and in the Guild of Riga.
Numerous awardees of the German contest “Jugend musiziert” have been playing in the Göppingen Youth Symphony Orchestra. Today many former members work as music educationalists or even succeeded in becoming a member of professional orchestra such as the Gewandhausorchester Leipzig, the Semper Oper Dresden, the Staatsorchester Stuttgart and the Stuttgarter Philharmoniker. 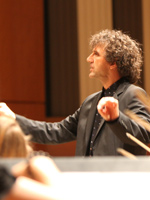 Since 1989 the conductor of the Göppingen Youth Symphony Orchestra has been Mr Martin Gunkel. Born in Bochum, Germany, Mr Gunkel studied at the universities for music at Düsseldorf and at Detmold where he majored in the subject violin. In addition he studied the subjects conducting and musical education science. Since 1991 he is the director of the Göpppingen School of Music.