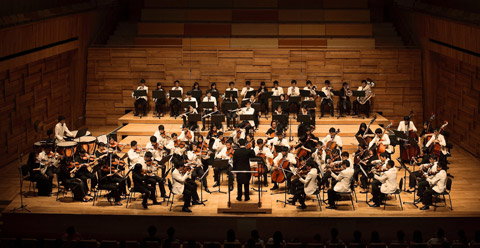 NUSSO, one of the pioneer university music groups in Singapore, is now home to over 80 members. It has over the years built itself an impressive repertoire and reputation, aiming to provide undergraduates opportunities to pursue their interest in music, and promoting orchestral music to the public.
Formally established in 1979 as the NUS Concert Orchestra under the directorship of Paul Abisheganaden, the Orchestra's beginnings can be traced back to the 1920s. In 1995, the Orchestra was inaugurated as the NUS Symphony Orchestra under the helm of Music Director/Resident Conductor Maestro Lim Soon Lee.
Bringing music to the university community and the public, NUSSO performs regularly on and off campus at venues such as the Singapore Botanic Gardens and Istana Park. Apart from annual formal and informal concerts, the Orchestra also performs in chamber groups for commissioned performances. NUSSO has performed at official functions including the World Trade Organisation First Ministerial Conference Concert Preview at the Sentosa Musical Fountain, NUS Convocation Dinners and the President's Scholarships Presentation Ceremony. 2009’s commissioned performances include performing in a sitar concerto by Kanniks Kannikeswaran, for Singapore International Water Week.
Notable collaborations NUSSO has been involved in include Franz Lehar's The Merry Widow, Dick Lee's Man of Letters, and the Singapore Idol finals 2004 and 2006. The Orchestra has accompanied soloists such as piano virtuoso Konstantin Scherbakov (2003), violinist Yang Tianwa (2004) and violist Anatoly Zelinsky, of Christchurch Symphony Orchestra (2007). The Orchestra has also rehearsed under prominent guest conductors Professor Hikmet Simsek of the Ankara Conservatory Orchestra, and the late Shalom Rondly Riklis of the Tel Aviv Orchestra. In 2008, musicians from NUSSO collaborated with popular Singaporean artistes in the open rehearsal of Generation/s, organized by The Arts House of Singapore. Collaborations in 2009 include performing at Video Games Live™, touted as being “the biggest and most popular game concert in the world” , at the Singapore Indoor Stadium in June. NUSSO’s most recent collaboration was with international pianist Geoffrey Saba in their annual concert under the NUS Arts Festival, Voyage to the Orient, where the orchestra and Mr Saba performed the Aisan premiere of Australian composer Peter Sculthorpe’s Piano Concerto. The orchestra most recently performed in the highly publicized ChildAid, the 2011 edition of The Straits Times & Business Times charity concert, together with many brilliant local and international young talents in a bid to raise funds to aid needy children in Singapore.
The Orchestra, the first student group in Singapore selected to participate in the Aberdeen International Youth Festival in 1998, has in recent years also participated in the 8th Japan International Youth Musicale in Shizuoka in 2000, the 12th Australian International Music festival in 2001, and was invited to participate again in the 2005 Aberdeen International Youth Festival, playing popular works by Mendelssohn, Tchaikovsky and Chen Gang’s Butterfly Lovers’ Violin Concerto. The NUSSO features regularly in the annual NUS Arts Festival (NAF) of NUS, garnering favourable reviews and comments, the most recent concerts being A Flame in the Night, performed in the Yong Siew Toh Conservatory Concert Hall in March 2008, A New Season, performed in the University Cultural Center Concert Hall in March 2009, and Voyage to the Orient, also performed in the University Cultural Center Concert Hall in March 2011.
Offering its members artistic instruction by professional tutors and numerous opportunities to travel and perform, the Orchestra, with its dedicated alumni, continues to hone its skills and raise its standard, while promoting appreciation for the arts in Singapore. 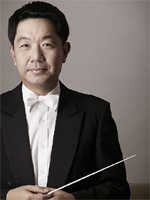 Lim Soon Lee joined the National University of Singapore Concert Orchestra in April 1994 as Music Director/Resident Conductor. Under his drive and leadership, the Orchestra was inaugurated as the National University of Singapore Symphony Orchestra in September 1995. His dedication to nurturing young music talents in Singapore speaks for itself in his enthusiasm for undergraduates to have access to the arts and to pursue aesthetic development.
Soon Lee's musical journey began at the age of eight with the piano and violin under the tutelage of Singapore musicians and instructors Goh Soon Tioe, Tan Kah Chin, Teo Kian Seng, Moses Wang, and Vivien Goh. He obtained his Licentiate of the Royal Schools of Music for violin and viola and was awarded the First Prize in the Viola Open Section at the Singapore National Music Competition in 1981.
Under a Public Service Commission/Singapore Symphony Orchestra Scholarship, he graduated in 1983 with a Bachelor of Music (Distinction) from the Eastman School of Music at the University of Rochester, New York, where he studied the viola under Atar Arad and Francis Tursi, and completed a two-year conducting course with David Effron and Donald Hunsberger. In the summers of 1984 and 1986, Soon Lee served as Principal Violist at Germany's Heidelberg Music Festival and was awarded a scholarship to study the viola under Kim Kashkashian at the Lausanne Academy of Music in Switzerland. From 1987 to 1997, he was with the Singapore Symphony Orchestra as Sub-Principal Violist, and was Singapore's only representative in the 1988 World Philharmonic Orchestra in Montreal, Canada.
Soon Lee has been associated with many orchestras worldwide, having conducted the New World Symphony Orchestra in Miami, the Plyzen Radio Symphony Orchestra of the Czech Republic, the Bakersfield Orchestra in California and the KLPac Sinfonietta in Malaysia. In Singapore, he has also directed the Singapore Symphony Orchestra on several occasions including the 17th SEA Games at the Singapore National Stadium and the World Trade Organisation First Ministerial Conference at the Sentosa Musical Fountain.
In 1995, Soon Lee was awarded the Jean Frederic Perrenoud Prize with a Certificate of Distinction in Orchestral Conducting at the 4th Vienna International Music Competition and was the finalist for the Outstanding Young Persons of Singapore Award conferred by the Orchid Jayceettes of Singapore in recognition of his contribution to social development in Singapore.
Currently, the Music Director/Resident Conductor of the Singapore National Youth Orchestra and the Associate Principal of String Performance at the School of the Arts Singapore (SOTA), Soon Lee continues to live his passion for the development of the local youth music scene.