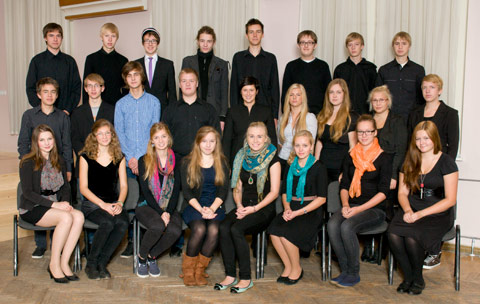 Tallinn Music Highschool is the only school in Estonia providing professional music education alongside the general primary and secondary curriculum. The Chamber Choir was founded in 1969 a. There are singing pianists, stringed instrument players, wind instrument players, composers, music theoretics, choral conductors and singers in the choir. Since 1989 til 2011 was the Conductor Evi Eespere, since 2012 the Conductor is Janne Fridolin 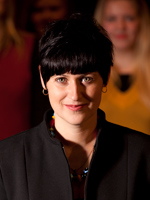 Conductor and music teacher Janne Fridolin is PhD student of choral conducting at the Estonian Academy of Music and Theatre (Prof Tõnu Kaljuste). In 2003 she graduated music pedagogics and in 2009 choral conducting with Prof Ants Üleoja. Since Sep 2002 to 2010 Janne Fridolin was the conductor of the Revalia Boy´s Choir, since Sep 2006 she is conducting the Youth Choir Vox Populi and since Jan 2012 Tallinn High School Boy´s Choir and Chamber choir.
Mrs. Fridolin is also music teacher in Primary School of Rahumäe.
Since 2009 Janne Fridolin is the Chair of the Estonian Society for Music Education.
Janne Fridolin was awarded prize of Heino Kaljuste Foundation in 2002, in 2011 she was awarded prize of Estonian Choral Association: The Best Young Conductor in 2010.