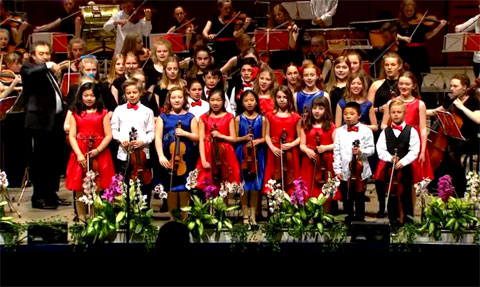 The Zapolski String Orchestra started in 1992 under the umbrella of the Music School of Copenhagen Municipality. It comprises of 3 ensembles, mainly the Zapolski Spirerne (children from 8 years old), Zapolski Junior (from 11 years old) and Zapolski String (from 14 to 25 years old) and the players varies from beginners to advanced level including soloist who are specially selected from the Danish Music Conservatory. A talented percussion player from the Music school of Copenhagen enchants the sound of the strings.
The 3 orchestra groups rehearsed individually and with all three combined and in turn perform together as one big orchestra. The kids and youngsters vary in their ages and backgrounds which portray a unique international identity. The concept of playing together allows the younger kids to be part of a real orchestra that plays advanced and complex music. This motivates the children and gives them a future prospect to what they can blossom into when they see the older and advanced students as their role models. The interactions across all levels, the music arrangement by Alexander Zapolski and the various symphonic preparations involved, work in a special way with the children’s development. The youngest beginner level kids play mostly on open strings and at the same time the older and advanced players play more complicated notes.
The children also get the opportunity to have a platform to play as a soloist for concerts accompanied by the orchestra and in turn enhance their skills in playing solo parallel with playing in the orchestra. In many ways, the orchestra rehearsal functions also as a group class where they can develop all the important and foundations of music skills like phrasing, bow stroke, bow technique and intonation. The children and the youngsters are also introduced to a broad spectrum of music literature from baroque to romantics and modernistic music.
Those who have developed their musical playing from the Zapolski Strings have won many competitions and awards. Many now still continue to play with the Danish symphony orchestra.
In 2013, Zapolski Strings received the Damusas award as the Best Music School Ensemble of the Year. 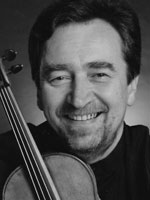 Alexandre Zapolski was born in 1951 and was educated as violinist at the Kiev National Music Academi under Professor Olga Parhomenko. Olga Parhomenko herself was a student of the legendary violinist David Oistrach. From 1976 until 1990 Alexandre was teaching violin as a lecturer at the Prokofiev Conservatory in Donestsk, Ukraine. In 1992 the Zapolski family moved to Denmark and Alexandre later joined the DR Symphony Orchestra as their violinist. Later he became the concertmaster and retired in 2014. In 2003 Alexandre started to teach at the Royal Danish Conservatory, MGK, giving also private lessons to students from age 6 and above.
In 1993 Alexandre started a string orchestra for children in corporation with Brøndby Music School. This orchestra later developed into the current string orchestra: Zapolski String, Zapolski Junior and Zapolski Sprouts. All the three ensembles are now under the Music School of Copenhagen Municipility.
Alexandre also leads the Junior Academy for violinists for the talent development programme at the Royal Danish Conservatory.
Alexandre Zapolski’s pedagogy work is unique as it starts from the beginners up to students from MGK and further up to the Conservatory level and also leads to become a soloist advanced students. He stresses that a musician career is not founded by a higher conservatory academy, but must start long before and the education starts as early as at 6 years old. It is Alexandre’s philosophy that the children develop through two kinds of work, namely individual lessons and the weekly orchestra rehearsals. The string ensembles in the levels function also as a form of group class where all the basics of music are covered. Furthermore, it gives an opportunity to children and youngsters to develop as accompanists and soloists.
Alexandre Zapolski is educated as a composer and has composed various pieces to be used for his pedagogy work. He uses his talent to arrange music that is suitable for his string ensembles. The Danish music culture has a lot of influence on his arrangements. He obviously managed to incorporate the elements of Russian music pedagogy into a modern Danish music pedagogy which could be very fruitful for both professional musicians and amateurs. Many young musicians in Denmark, both Alexandres private pupils and Zapolski String participants regularly receive highest music awards and recognitions in the country and abroad.
Alexandre has received Emil Holms Scholarship (2014) for his work with the youth string ensemble. In 1987 he was awarded the ‘Well Deserved Artist in Ukraine’ and in 1994 he received the Fritz Buschs Scholarship from the DR Symphony Orchestra. Zapolski’s Quartet also received an award in 2000. In 2011 Alexandre received the Jacob Gade award for his work with young children and youth. Furthermore, Alexandre was recently appointed as the Knight of the Dannebrog of Denmark by Margarethe II the Queen of Denmark.