Kreisler strings is the intermediate level group of the three string ensembles at Caulfield Grammar School. In this group students continue to develop their individual and ensemble skills through studying and performing a broad range of string repertoire, ranging from Bach and Vivaldi to film scores and recent publications for string ensembles. Members of the group are all high school age students, ranging from Years 8 to 12. All members of Kreisler Strings are expected to undertake private tuition on their selected instrument.

Kreisler Strings performs at numerous school related function each year including concerts and events organised by the school as well as community-based events. Every second year members of the group are involved in the School Concert held in Hamer Hall; Melbourne’s premier concert hall.

Members of the group are also involved in the schools’ Symphony Orchestra as well as Chamber Music ensembles or other bands and choirs, giving them the opportunity to undertake a broad range of musical experiences and to study and perform a wide range of music repertoire. 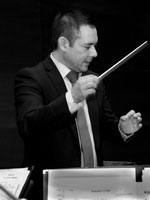 Jason Leinkauf started music training at a very young age beginning with piano tuition with the late Nehama Patkin who was a prominent Suzuki Piano teacher. At age nine, he commenced violin lessons and at age twelve he was accepted at the Victorian College of the Arts Secondary School, Melbourne, Australia to commence further Violin studies under the tutelage of Spiros Rantos, Gerard van de Weide and Mark Moghilevski. Jason achieved his A.mus.a and L.mus.a whilst learning with these inspirational teachers.

After graduating from the Victorian College of the Arts Secondary School, Jason commenced his tertiary studies and went on to gain a Bachelor of Music Performance from Monash University and a Graduate Diploma of Education from The University of Melbourne.

Jason is a passionate and enthusiastic teacher and conductor. He, along with the string staff of Caulfield Grammar utilises the Suzuki Method and Philosophy to inspire young students to achieve their very best, and to become lifelong learners and musicians.

He currently conducts many string ensembles at his school which range from the primary aged Junior String Orchestra to the most senior and advanced group, Chamber Strings.

David commenced his musical career as a member of the Royal Australian Air Force Central Band and whilst serving with the band undertook a Bachelor of Education (Music) at the University of Melbourne, completing his degree in 1984.

During the 1980’s David performed as a freelance musician (playing bassoon) and performed with the Melbourne Symphony Orchestra, the Victorian State Opera, the Australian Pops Orchestra and other professional orchestras engaged for stage shows.

David joined the Music Staff at Ruyton Girls’ School in 1985 and in 1991 was appointed Director of Music. Under his direction the Music Department at Ruyton flourished and Ruyton ensembles received superior ratings at competitions and eisteddfods including the Waverley Eisteddfod, Boroondara Eisteddfod, Latrobe Valley Eisteddfod and the prestigious South Street Competition.

David studied conducting at Monash University with Mr. Robert Rosen and later with Mr. Tom Dvorak, Director of Bands at The University of Milwaukee & Wisconsin. David has conducted a range of school and community ensembles including choirs, orchestras and bands, including ensembles associated with Melbourne Youth Music Summer Schools and State Music Camp Victoria.

In 2009, David was appointed to the position of Campus Head of Music at the Caulfield Campus, Caulfield Grammar School. In 2012 he transferred to the Wheelers Hill Campus of Caulfield Grammar School where he currently serves as Campus Head of Music. At the Wheelers Hill Campus, David currently conducts the Symphony Orchestra, Kreisler Strings and Chamber Music ensembles.

Concert at the MuTh: