On any given day during the school year, music is heard in and around the school campus of St. Paul’s Co-educational College Primary School. Founded on the Christian spirit of Faith, Hope and Love in 1915, St. Paul’s Co-educational College Primary School has since established itself as one of the leading schools in Hong Kong, not only in academics and character development, but also in the area of music education.

Music has been a collective memory of many generations of St. Paulians, and students are offered ample opportunities and platforms to discover and develop their musical talents at St. Paul’s, from the four choirs to the two orchestras, and from the wind band to the percussion ensembles. In addition, the school offers a Programme for the Musically Gifted to provide a tailored platform to challenge, stimulate and develop those who possess extraordinary musical talents.

Music has taken these music makers at St. Paul’s to concert stages in Hong Kong and abroad, including China, Singapore, United Kingdom in recent years. The SPCCPS Music Makers of 2017 comprise of talented young instrumentalists from the school’s Senior Percussion Ensemble and the Programme for the Musically Gifted. 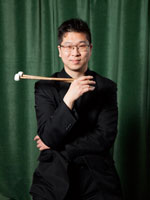 While studying in HKAPA, Tak started playing in professional orchestras and productions including HKPO, Hong Kong Sinfonietta, Macao Orchestra and the Academy of St. Martin in the Fields. Besides, Tak played in a lot of musical productions, such as West Side Story, Damn Yankees!, The Wizard of OZ, My Fair Lady, The Pirate's of Penzance and Crazy for You. He played in the famous musical CATS, and travel to Korea with the production in 1994.

Tak is an active educator in Hong Kong. He became a percussion tutor and percussion band conductor in St. Paul’s Co-educational College Primary school since 1993. As been a percussion tutor of HKAPA since 1999. His students have received major local and international prizes including International Young Musician Award of the Llangollen International Musical Eisteddfod, First Prizes in Italy Percussion Competition, Parsons Music Scholarship of Wind, Brass and Percussion Instruments, and first prizes in the Hong Kong Schools Music Festival Xylophone and Marimba Solo Competitions. 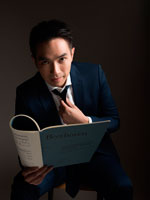 Hailed by The Straits Times as a musician with “a wonderful sense of colour and impeccably controlled articulation” and lauded by critics of his Carnegie Hall debut as having “thought through his approach to the finest of details and… executed with exact precision…”, Warren’s artistry has brought him to four continents, gracing stages of all sizes and forms and in collaboration with international artists and leading orchestras in Asia.

A graduate of the Royal Academy of Music and Yale School of Music, Warren made his televised début with the Hong Kong Philharmonic Orchestra at the age of six and was the first-prize winner of the 1995 Stravinsky Awards International Piano Competition and the Grand Prix Ivo Pogorelich.

Warren’s discography includes multiple acclaimed albums of solo and chamber music repertoire. The American Records Guide calls him a “first-rate artist” while the Fanfare Magazine calls him “a pianist to watch out, whether as a soloist or chamber musician.”

A Steinway Artist since 2009, he was among the first featured artists to record on Steinway’s Spirio upon its launch in 2016. Currently the Music Director of St. Paul’s Co-educational College, a recipient of the Cultural Leadership Citation from Yale University School of Music in 2016, Warren is co-currently the Hong Kong Representative of Royal Academy of Music, as well as a visiting artist in various institutions around the world. Warren holds an MBA degree, and is also an award-winning and internationally published composer.

In recognition of his significant contributions to the music profession, Warren received the Ten Outstanding Young Persons Award in Hong Kong in 2012, an Associateship from the Royal Academy of Music in 2015 and the Ian Mininberg Distinguished Alumni Award by the Yale School of Music in 2017.