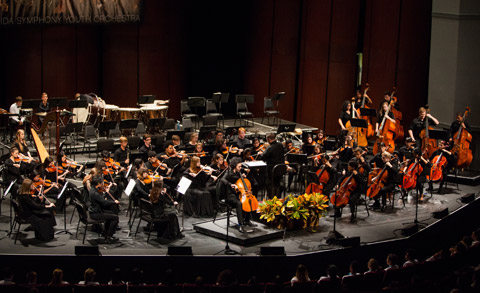 The Symphonic Orchestra, conducted by Music Director Mr. Hanrich Claassen, is a pre-professional, conservatory level orchestra in which students are challenged with exceptionally difficult literature.

Celebrating its 60th Anniversary Season, The Florida Symphony Youth Orchestra continues its commitment to providing Florida’s young musicians with the opportunity to strengthen their musical talents and develop an appreciation on of the arts through classical music. Membership in the Florida Symphony Youth Orchestra is by invite on only, following competitive entrance auditions.

FSYO is comprised of three full orchestras, a chamber orchestra, and one string training orchestra. The five FSYO orchestras are carefully structured so that students can grow with the FSYO throughout their primary and secondary years. The full range of ensembles gives every student a place to excel with peers at a similar level, and all an opportunity to collaborate with and learn from seasoned music professionals, on the local and national levels. 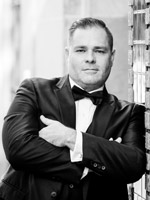 Hanrich Claassen is a passionate cellist, conductor and educator who believes a balance between educating and performing music is the key to true artistic enlightenment.

As a professional cellist, Mr. Claassen has been a member of various philharmonic and chamber orchestras in South Africa, Portugal, Bahrain and China. During Mr. Claassen’s stay in Shanghai he was Assistant Music Director, cellist and conductor for the Shanghai Baroque Chamber Orchestra. Mr. Claassen was awarded the bronze medal during the 2010 Len van Zyl Conducting Competition in Cape Town after his direction of the Cape Philharmonic Orchestra. Other notable conducting opportunities have taken Mr. Claassen to the National Theatre of Windhoek, Namibia, the Cincinnati Conservatory of Music Spoleto Festival, Italy and to Varna, Plovdiv and Stara Zagora, Bulgaria as assistant to Maestro Dian Tchobonov for Varna International’s Le Nozze di Figaro. Mr. Claassen has been guest clinician and conductor at various orchestra festivals for the Association for Music in International Schools (AMIS) and the Asian Pacific Activities Conference (APAC). As chamber musician he has worked in Japan, China, Austria, Switzerland, Portugal, Brazil, Saudi Arabia, Bahrain and South Africa.

2004-2007 Mr. Claassen spent in Saudi Arabia as Coordinator of Performing Arts at the British International School of Al Khobar. Since 2007 he was String Orchestra Director and Head of Middle School Fine Arts at the Shanghai American School, Pudong Campus where he conducted four string orchestras and the SAS MS symphony orchestra. Mr. Claassen relocated to Vienna, Austria in June 2013 as the Middle and High School String Orchestra Director for the American International School Performing Arts team.
In August of 2015 Mr. Claassen was appointed to Montverde Academy, Florida as Instrumental Music Teacher and Lower Strings Specialist in the newly established Montverde Academy Conservatory.