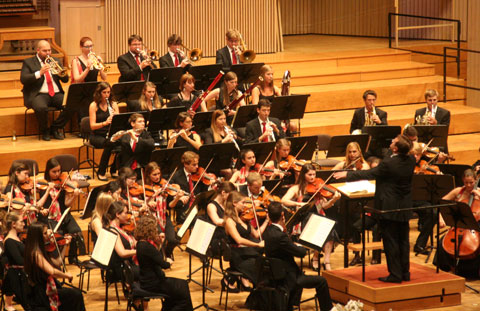 Founded in 1987, the Wiener Jeunesse Orchester (WJO) has established itself as Austria's national youth symphony orchestra. The members of the WJO are students between 18 and 26 years of age and come from music universities and conservatoires of all Austrian provinces.
The WJO was founded at the initiative of its first artistic director, Manfred Honeck, and under the patronage of Jeunesses Musicales of Austria. The orchestra, however, is an independent association characterised by codetermination and responsibility shared by its members.
In 1989, Herbert Böck was appointed chief conductor to the orchestra. Under his direction and through its high artistic commitment, the WJO has acquired an excellent reputation as a pre-professional youth symphony orchestra.
It strongly contributes to the advancement and education of young musicians in Austria and is supported by the Cultural Department of the City of Vienna, the Arts Department of the Federal Chancellery of Austria and the Austrian Federal Ministry for Europe, Integration and International Affairs. The WJO is a founder member of the European Federation of National Youth Orchestras (EFNYO) which was established in 1994 with the aim of enhancing cooperation between the finest national youth orchestras all over Europe.
Following the annual auditions, the WJO meets in three working periods per year to work on symphonic programmes under the guidance of renowned tutors and conductors. The WJO performs regularly at the Vienna Konzerthaus and Musikverein, and has visited all major concert venues in Austria. The orchestra has taken part in such prominent festivals as the Wiener Festwochen, Klangbogen Wien, Wien modern, Donaufestival NÖ, Carinthischer Sommer, Brucknerfest Linz, and is a regular guest in the concert series of Jeunesses Musicales of Austria. In August 2003, the WJO gave its successful debut at the Salzburg Festival under the direction of Rupert Huber performing works by Jani Christou.
In July 1998, the WJO participated in the World Youth Music Forum in Moscow at the occasion of the first World Olympic Youth Games and was awarded the first prize among ten youth orchestras from all over the world. In February 1999, the orchestra performed in ten cities throughout France on a three-week tour taking the orchestra from Épinal, Verdun, Paris, Montélimar to Carcassonne and Sète.
In the past years, highly acclaimed concert tours have taken the WJO throughout Europe with performances at the Concertgebouw Amsterdam, at World Expo in Hannover, Kultursommer Nordhessen in Kassel, the Festivals Young Euro Classic in Berlin and Hamburg, at the Gustav Mahler Festival in Dobbiaco (Italy), the Festival de Musique de La Chaise-Dieu (France), the Spilberk Festival in Brno (Czech Republic), in Belgrad (Serbia), Istanbul (Turkey), at the Slovak Radio Hall and Philharmonie in Bratislava, and at the Festival Young Classic in Wroclaw (Poland). On these
tours, the orchestra played works by Schubert (Symphony No. 9), Mahler (Symphonies No. 1 - 5, The Song of the Earth), R. Strauss (The Four Last Songs, Till Eulenspiegel, Don Juan), Dvorák (Symphonies No. 7, 8, 9), Bruckner (Symphonies No. 4, 7, Mass in B-minor), and a series of premieres by Austrian contemporary composers such as Wolfram Wagner, Herwig Reiter, Franz Thürauer, Kurt Estermann, Helmut Hödl, Herbert Willi, Christoph Ehrenfellner, Wolfgang Sauseng, and Jakob Gruchmann.
Celebrating its 25th anniversary season in 2012/13, the orchestra gave an acclaimed gala concert at the Wiener Musikverein, and undertook an anniversary tour to Romania with debut performances at the Athenaeum in Bucharest and at the Enescu Music World Festival in Sinaia which were received enthousiastically by audiences and press.
Besides the continuous work with its chief conductor, the WJO has worked with renowned guest conductors including Atso Almila, John Axelrod, Asher Fisch, Valéry Gergiev, Manfred Honeck, Rupert Huber, Lutz Köhler, Gérard Korsten, Daniel Meyer, Andrés Orozco-Estrada, Andrea Quinn and Johannes Wildner.
The orchestra has collaborated with prominent soloists such as Christian Altenburger, Nareh Arghamanyan, Olaf Bär, Thomas E. Bauer, Christopher Hinterhuber, Wolfgang Holzmair, Danjulo Ishizaka, Michael Martin Kofler, Ernst Kovacic, Ursula Langmayr, Harriet Krijgh, Elisabeth Leonskaja, Annette Markert, Paul Meyer, Boje Skovhus, Benjamin Schmid, Matthias Schorn, Emmanuel Tjeknarovian, Pieter Wispelwey, Nikolaj Znaider and the Vienna Clarinet Connection. The WJO performs regularly with young Austrian soloists and encourages the formation of string and and wind chamber ensembles within the orchestra. 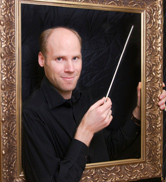 Born in Salzburg 1975 Christoph Ehrenfellner comes to be one of Austrias most versatile artists of his generation. He is acclaimed violinist, composer and conductor, 2016-2019 artist in residence at Theater Nordhausen/Germany and Loh-Orchester Sondershausen, where he composes new opera, ballet and symphonic music, conducts and performs.
Christoph Ehrenfellner is composer in residence at the Opera Festival Retz/Austria 2017 and at the Loisiarte Chamber Music Festival 2017, where he composes for the Arnold Schönberg Choir. He held residencies at the Orchestre Symphonique de Mulhouse/France 2012, Seiji Ozawa Academy/Geneva 2013, PalmKlang Festival/Salzburg 2015.

As a violinist Christoph performs in this season with the Loh-Orchester Sondershausen, Krasnojarsk Symphonic Orch. and the Mexico City Phil. 2016-17 he is doing a complete recording of Beethovens Violin Sonatas in Tokyo. He was guest-concertmaster at the Mahler Chamber Orchestra, Simon Bolivar Youth Orchestra and OENM Salzburg (Ensemble for Contemporary Music), since 2006 he is leading the Zuckmayer Ensemble Wien-Berlin and touring at Festivals worldwide.

Ehrenfellner is honorary member of the Japan Austria Cultural Association. His thesis ‘Art&money’ is edited at the Akademiker Verlag Saarbrücken.