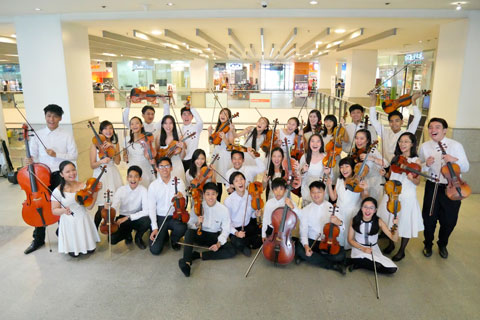 The Manila Symphony Junior Orchestra is the youth orchestra program of the Manila Symphony Orchestra Foundation, Inc. It is composed of the most advanced students of the MSO Music Academy and other qualified students ages 9 to 18 years old under the baton of Prof. Jeffrey Solares. Several members of the ensemble are scholars of the Philippine High School for the Arts (PHSA). They regularly rehearse a varied repertoire with special focus on Classical and Baroque masterworks together with especially arranged modern and Filipino compositions. Selected members of the MSJO are also form a core of as soloists within the ensemble and are featured in their various performances part of their training experience.

Since its establishment in 2014 they already have performed concerts in major concert venues like the Cultural Centre of the Philippines, The Rizal Park Open Air Auditorium, the National Arts Centre Auditorium, The Peninsula Hotel, The Ayala Museum in Makati City,and the Insular Life Auditorium in Alabang. They have also performed in provincial tours in 2015 in Puerto Galera, Mindoro Oriental and in 2016 in Baguio City. In December 2016 they have been presented by Cultural Centre of the Philippines and the Ayala Malls in a concert cour of their program “Strings Like Teen Spirit,” with the goal of fund raising to build a the MSO Recital Hall. 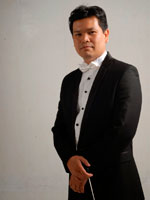 Jeffrey Solares is one of of the most active figure in promoting classical music in the Philippines in his varied role as violinist, conductor, educator, music arranger, concert host and builder of orchestras.

His formal training in music started when he was accepted as a scholar in the Philippine High School for the Arts, a special school for young artists based in Mount Makiling, Laguna, where he graduated in 1990 as Valedictorian. He pursued a Bachelor of Music degree at the St. Scholastica’s College under Prof. Basilio Manalo and Prof. Arturo Molina. Upon graduation he was asked to go to Cebu to help establish and develop the Cebu Youth Symphony Orchestra and the Peace Philharmonic Philippines Chamber Players.

In 2005 he returned to Manila and for a time was the Resident Conductor of the Philippine Philharmonic Orchestra (PPO) at the Cultural Center of the Philippines. He then joined the string faculty of the University of Santo Tomas, St. Scholastica’s College and the Philippine High School for the Arts.

At present he is the executive director and associate conductor of the Manila Symphony Orchestra (MSO), one of the oldest orchestras established in Asia. His major responsibility is to develop a network of support for this orchestra and help it reach higher levels of artistic excellence and audience reach through its annual MSO Gala Concert Series in major concert venues in Metro Manila and the MSO Rush Hour Concerts at Ayala Museum.

In 2014 he helped establish the MSO Music Academy and started its youth orchestra project, the Manila Symphony Junior Orchestra (MSJO). He trains the violin teachers for the MSO Music Academy and he has also helped establish various orchestra programs Tacloban, Naga, Lipa and in Cagayan de Oro City. He continues to pursue formal training in the Suzuki Method, a specialized approach to teaching music for young children.