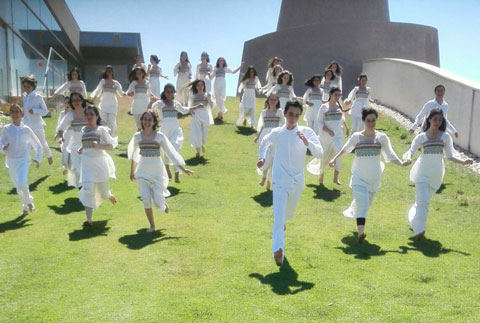 The 'Efroni' choir was founded in 1981 on the initiative of Ms. Maya Shavit who conducted the choir for more than thirty years. The children in the choir, aged 9-18, come from all areas of Emek Hefer and represent a wide section of the Israeli population.
The Efroni Choir regularly collaborates with main Israeli orchestras and constantly performs on leading platforms in and outside Israel. The choir puts an emphasis on Israeli music: original compositions, traditional ethnic songs, and arrangements of Israeli popular songs. In addition to Israeli music, the choir performs a variety of styles: from the Renaissance to contemporary, from different cultures and in various languages.
The Efroni has always initiated and participated in extra-musical activities that are pro tolerance and educational; throughout the years the choir has collaborated with the Ilan Ramon Foundation, Sawa Choir (an Arab choir from Shfaram), and has led an educational program with the elementary schools in Emek Hefer.
In 2014 Dr. Tommer Hesseg was appointed Conductor and Music Director of the Efroni. In June 2015 the choir's live performance in Mishkenot Sha'ananim was broadcast on Israel's National Radio - channel Kol Hamusika, and July that year the choir participated at the Europa Cantat Festival in Hungary . In September 2015 the Choir performed in the Israeli Music Festival. In September 2016 the choir has released the original song Shma to the radio. In December 2016 the choir collaborated together with Colla Voce Choir from South Carolina USA and Tel-Aviv Soloists String Ensemble. 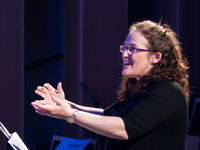 Shelley Berlinsky was born and raised in Kibbutz Gan Shmuel. Shelley has graduated from The Jerusalem Academy for Music and Dance as a vocal musician. As a singer Shelley has specialized in the genre of acapella in the field of ancient and early music.
Shelley is the Soprano of the Thalamus Quartet, an a-cappella ensemble which she founded in 2002. The Quartet is one of the leading vocal ensembles in Israel performing in major festivals, various radio stations and TV programs.
As a conductor, Shelley has founded the Cupellate choir, a heterogeneous choir comprised of singers from all walks of life and various religions.
As a musical educator, Shelly instructs singers of a broad spectrum of age groups, from kindergarten to seniors, and has also worked extensively with the needy, believing that singing in itself has the strength to elevate, enrich and connect people whoever they may be.
Shelley has been conducting on the younger Efroni choir for the past 4 years and has been working with the Performing Efroni group for several months.