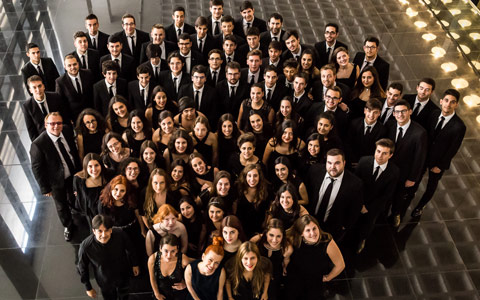 The Alicante´s Youth Orchestra was founded in 2009, by Francisco Maestre as its Chief Conductor with the support of the Diputación de la Provincia de Alicante. The 80 most passionate and talented youth musicians, come from Alicante’s region, and from very different backgrounds - but they're bound together by their passion for classical music, enthusiasm to be challenged and desire for inspiring others.

The OJPA´s members, every year have to pass an audition to be accepted in the orchestra. Under the guidance of their conductor, renowned soloists, and distinguished guests, with a team of professional tutors the young musicians of the Alicante Region are having a unique opportunity to improve and complete their musical learning experience within the orchestra.
With the dedication to strive for excellence at technical mastery, artistic and self-expression, the OJPA´s Program consist of intense weekend-rehearsals in ADDA - Auditorio de la Diputación de Alicante, demanding repertoires, around 20 concerts per year presented in Spain and abroad and participation in Competitions, Festivals and Tours.
The OJPA is well appreciated for its regular Charity Concerts organized by Rotary-Clubs, for its engagement in the World and Europe-Premieres and collaboration with the Alicante´s region chorus, for the RNE (Spanish National Radio) record of the famous Mozart's Requiem as part of the campaign "one toy-one illusion", among others. The orchestra has been in charge twice of the Concert of Europe in Alicante.

Since 2009, OJPA has built up their repertoire of various styles, from lyric and opera programs to contemporary and classical masterpieces joined by remarkable Spanish and International soloists such as Edicson Ruiz, José Sempere, Miguel Torres Peñarrocha, Pepa García, Andrei Frolov, Natalia Villán, Carlos Santo, Alfredo Ferre…
Every summer the young musicians have participated in the most prestigious European Festivals performing in the best venues, the Schleswig-Holstein Music Festival from Hamburg (Germany), International Youth Orchestras Festival Eurochestries (France), Summa Cum Laude Vienna (Austria), where in 2015, the orchestra has been awarded for achieving the 1st place with excellent success in the competition of the Golden Hall of Musikverein. The OJPA was honored to celebrate their achievement in the Gala Concert at Vienna´s Konzerthaus Hall.
From 2013 to the date, the OJPA has hosted the Alicante´s International Youth Orchestras Festival (FIJO). The event has provided valuable occasion to learn and exchange musical and cultural experience with the world´s finest musicians and where the OJPA shared the stage with variety of youth participants Orchestras: TWIS Youth Orchestra of Brussels (Belgium), Jugendorchester Oberthurgau Switzerland, Young Provincial Orchestra of Malaga, Orchestra Giovanile di Roma, “Eurasian Symphony Orchestra of Kazakh National University of Arts”, Symphonic Orchestra of the Moscow State College F. Shopin, Youth Mariinsky Theatre Orchestra...
In addition to its annual program, the orchestra´s highlights of the 2017 season will be its participation in the FIJO Alicante, Holand Tour and SCL Festival. 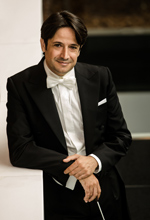 His commitment to Contemporary Music and Composers has led him to conduct many premiers by leading and emerging composers: the Spanish Premiere of the Concerto for Double Bass and Orchestra by R. Martinsson with the Berlin Philharmonic soloist Edicson Ruiz, Europe Premier of the Opera Oh My Son, Europe Premier of “Libertadores” by Oscar Navarro at MuTh Hall in Viena and World Premiere of the Concerto for Guitar and Orchestra by Simone Iannarelli at the International Guitar Festival “José Tomás”.
In collaboration with the Alicante´s Administration, he expanded the education programs to include new clinics, side-by-side concerts, competitions, festivals, masterclasses, mentorship programs and continues to create innovative projects to engage the talents and communities, bringing vibrancy and blossoming collaboration to the musical culture in Alicante and abroad.
Among its commitments for 2016/17 is to conduct the National Chamber Orchestra of Kazakhstan, Junge Kammerphilharmonie Rhein-Neckar, Amersfoorts Jeugd Orkest and the Palermo Classica Symphony Orchestra, his debut in México and Venezuela, joined by the soloists Aiman Mussakhajayeva, José Sempere, Sofia Vasheruk y Edicson Ruiz.