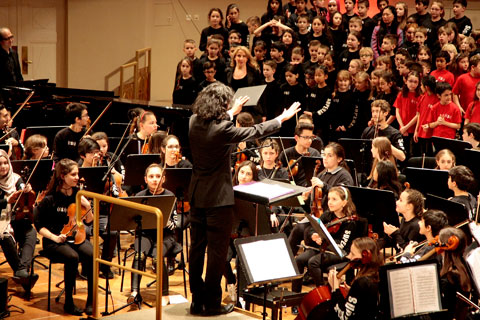 Superar is a non-profit organisation offering free-of-charge instruction in vocal and instrumental music to children. Founded in 2009 by the Vienna Konzerthaus, the Vienna Boys Choir and Caritas Vienna, Superar works in locations where the energy of music positively influences the lives of children who otherwise would have little or no access to the arts. The program thrives because the rehearsals are frequent, exciting and fun.
In addition to the development of music skills, the program benefits every child with the acquisition of many other important competencies: concentration for long periods of time, dedication and persistance with the task at hand, and creative thinking. As instruction is held exclusively in groups, the children readily develop a sense of community, tolerance and an understanding for cultural differences. Repertoire choices are made to represent every group in the program. The music making thus brings along a process of integration, awakens a curiosity for lifelong learning and serves as a model of equal opportunity for all.
Superar programs enroll over 1300 children in Vienna, Salzburg, Graz and Vorarlberg, and 1000 children in Bosnia, Lichtenstein, Romania, Slovakia and Switzerland. As an example of diversity, there are 29 languages and 11 religions represented in Superar Vienna alone. Superar offers instruction within the school day, integrated in the daily schedule, or in afterschool programs. All ensembles are non-auditioned and offer a wide variety of performance opportunities. 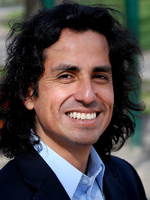 Andy Icochea Icochea is a multi-faceted musician who regularly appears as an orchestral and opera conductor, choral conductor and accompanist, and whose compositions and arrangements are performed internationally. He has appeared in over 500 concerts in 29 countries and four continents, in venues such as Carnegie Hall, Suntory Hall, Wiener Musikverein, Tonhalle Zürich and Berliner Konzerthaus. As a guest conductor, he has led the Vienna Chamber Orchestra, Orquesta Filarmónica de Ciudad de México, Orquesta Sinfónica Nacional del Perú and the Brookline Symphony, among others.

Icochea Icochea has collaborated as choral conductor and rehearsal accompanist with Riccardo Muti, Georges Prêtre, Adam Fischer, Franz Welser-Möst, Bertrand de Billy and Bernard Haitink. His choruses have performed with the Vienna Philharmonic, the Vienna Symphony, the Royal Stockholm Symphony Orchestra and the Boston Symphony. He has conducted world premieres of operas in Austria, Italy and the United States. Additionally, he has served as guest Clinician for the Boston Symphony Orchestra's education programs.

He currently serves as Music Director of Superar, a non-profit organization that provides high quality music instruction free of charge to 2000 children in six countries in central and Eastern Europe. Previously, he has served as Kapellmeister of the Vienna Boys Choir and Artistic Director of Voices Boston and Harvard Pro Musica.