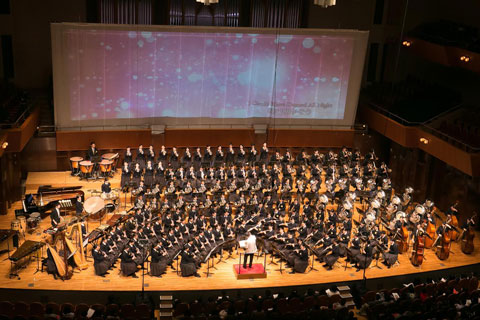 The Osaka Toin Symphonic Band was formed in 2005 and has 182 members.
In 2006 they participated in the All Japan Band Competition for the first time. In their nine appearances in the contest, they’ve place first four times. In 2008 the orchestra participated in the All Japan Marching Contest for the first time, and in subsequent appearances they’ve taken first place four times out of five performances. In July 2013 they held their first overseas performance in Austria’s Wiener Staatsoper (The Vienna State Opera). In Schladming they also participated in the15th MID EUROPE competition for youth wind bands, winning the overall Grand Prix.
In 2013 the orchestra gained exposure when they were featured on the TV program “Warrate Koraete.” In 2014 they participated in NHK and 24-hour Television “Budokan Live” broadcast.
In March of 2015 they were invited to participate in a St. Patrick’s Day parade in America, the first parade appearance for a Japanese group, which was broadcast across the US.
They also received praise and a standing ovation from their audience when they performed their “Toin Concert” at Carnegie Hall.
The orchestra has performed in Ishikawa Prefecture’s “La Folle Journee Kanazawa,” in invitational performances in Tokushima Prefecture, Tokyo, Ehime Prefecture, and Kurashiki City, in Kanto Regional Invitational Performances with appearances in Minamiashigara, Kitamoto City, and Sagamihara, and in Kyushu Invitational Performances in Kumamoto, Nagasaki, and Fukuoka, among others.
In 2016 the group won top honors in the large orchestra division and the “MEXT Prize” at the Japan Wind Orchestra and Ensemble Competition.
With more than 90 performances a year, the orchestra has won the hearts of many fans. 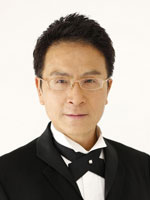 Band director Takashi Umeda was born in Osaka. He attended Osaka City Ougimachi Dai-Ni Commercial High School, where he studied piano from his second year, and he began to work as a pianist after graduation.
In 1979 he graduated from the vocal department of the Osaka College of Music, and went to work as a music teacher for the city of Osaka, spending one year at his alma mater of Ougimachi Junior High School and ten years at Minato Junior High School. He then spent eight years at Ikuno Junior High School, followed by eight years at Jouyou Junior High School. In total he has 27 years of experience as a wind orchestra advisor. During that time, he brought bands to the All Japan Band Competition five times, twice with Ikuno and three times with Jouyou. In March, 2006, he retired as a public school teacher and went to work in the music department of the private Toin High School as a music instructor and director of the wind orchestra, taking them to the All Japan Band Competition only two years after founding the orchestra. They’ve since participated in the All Japan competition nine times and taken gold three years in a row.