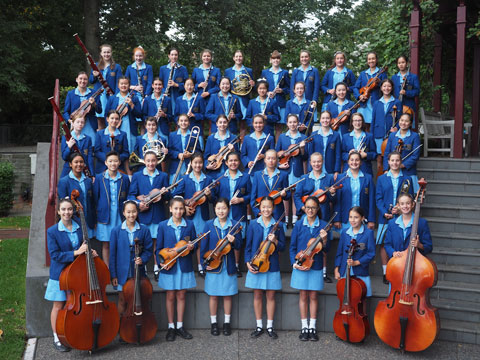 Loreto Mandeville Hall Toorak is a Catholic School for Girls from ELC to VCE. Established in 1924, it is one of many schools throughout the world directed by the Institute of the Blessed Virgin Mary (IBVM) or Loreto Sisters. Englishwoman Mary Ward founded the Loreto order over 400 years ago and today Loreto Sisters work in more than 25 countries around the world.
In the world-wide Loreto tradition, Loreto Mandeville Hall is committed to the education of girls. Our mission is to nurture the growth of capable, compassionate, independent and committed Christian women who are characterised by freedom of spirit, felicity, integrity, a concern for justice and a love of learning.
The Loreto Mandeville Hall Music Department has a staff of over 40 who teach classroom music, instrumental music and direct ensembles. Approximately 500 instrumental lessons take place each week and girls are involved in 28 music ensembles – bands, choirs, orchestras, various instrumental / vocal ensembles and chamber groups – which rehearse weekly.  As part of its extensive performance program, this is the School’s fifth International Music Tour; previous tours have been to Europe (Italy, Germany, Austria), England, Ireland and the USA.

At Loreto Mandeville Hall students are introduced to orchestral instruments through the Year 3 String, the Year 4 Percussion and the Year 5 Brass and Woodwind Programs. The orchestral tradition is strong with five orchestras in the School which cater for all ages and abilities. The senior orchestras – Loreto Symphony Orchestra and Mandeville String Orchestra – focus on performing works from the standard orchestral repertoire.

Each year these orchestras perform at various school concerts and venues, including Hamer Hall and the Elisabeth Murdoch Hall, Melbourne Recital Centre. The 2017 Tour Orchestra has been specially formed, consisting of orchestral players drawn from the three orchestras available to Years 7 – 12 musicians.

Jane-Marie is a violinist, teacher and conductor from Melbourne Australia. As a violinist she has performed professionally in Australia and Europe, most notably with the Melbourne Symphony Orchestra, Opera Victoria, Kärntner Symphony Orchestra in Klagenfurt, Austria, the Philharmonia Orchester, Dortmund, the Kammersinfonia, Bremen and the Klassische Philharmonie Bonn.

She began her musical studies at the of five. Her teachers include Mr Spiros Rantos, Professor Brian Finlayson and Frau Professor Susanne Rabenschlag. She has completed a Bachelor of Music degree from the Hochschule für Musik, Cologne, Germany, as well as a Bachelor of Science degree and Graduate Diploma in Arts from the University of Melbourne and a Graduate Diploma of Education from Monash University.

She has held the position of Head of Strings at Loreto Mandeville Hall Toorak for over ten years, where she directs both the Senior Orchestra and Senior String Orchestra.