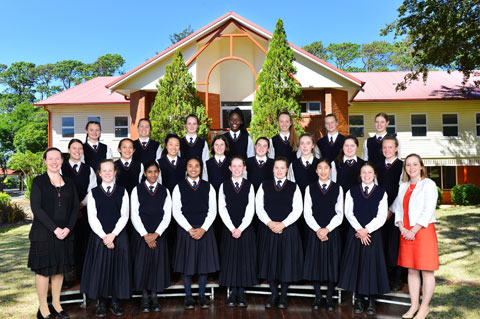 The Glennie School is an Anglican All Girls Day and Boarding School in Toowoomba, Queensland, Australia, with an enrollment of 800 students from Prep to Year 12. Choral Singing has a long tradition at The School, with 7 choirs catering for all ages and abilities.
Each year, The Glennie School's choirs participate in local and state Eisteddfod and festivals. In 2012, The Glennie School combined with Tooowoomba Grammar School in their first overseas music tour to Germany, Hungary, Switzerland, Austria and Slovakia, competing at the Bratislava International Festival of Music. The touring choir enjoy singing Australian repertoire and has commissioned two new Australian works to perform as part of the 2016 Summa Cum Laude International Festival.

Emma is an active and passionate music educator, conductor and performer. She has sung with numerous choirs across Queensland, including the Brisbane Birralee Voices, Resonance of Birralee and she is currently a member of the vocal ensemble Fusion, which has just performed as one of the guest choirs at Choralfest in Melbourne, 2015. Emma has travelled extensively throughout Australia during her career as a choral singer, including a performance at the 2006 Commonwealth Games in Melbourne and she has also travelled to the United States to perform at the Pacific International Children’s Choral Festival. A particular highlight for Emma came in 2014 when she was invited to represent the Australian National Choral Association at the Brisbane reception for their Royal Highnesses the Duke and Duchess of Cambridge.

Emma holds a Bachelor of Music majoring in Performance (Classical Voice) from the Queensland Conservatorium of Music and a Graduate Diploma of Education from the University of Queensland. As a student Emma performed in numerous operatic productions including Saul by Handel, A Midsummer Night’s Dream by Britten and Cendrillon by Massenet. Whilst at the Conservatorium Emma also had to opportunity to perform with several community ensembles including Brisbane Chorale, Canticum Chamber Choir, Cathedral Schola of St Stephen, the Queensland Youth Orchestra and the Queensland Pops Orchestra.

Emma is currently employed as the Middle Years Performing Arts Co-ordinator at the Glennie School and is engaged as the conductor for three choral ensembles, including the Glennie Chamber Choir. Emma is dedicated to excellence in choral education and providing all children with the opportunities to discover and develop their skills and achieve personal fulfilment as choral musicians.