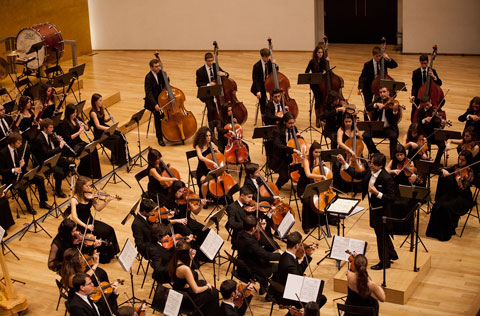 The Alicante´s Youth Orchestra was founded in 2009, by Francisco Maestre as its Chief Conductor with the support of the Diputación de la Provincia de Alicante. The 80 most passionate and talented youth musicians, come from Alicante’s region, and from very different backgrounds - but they're bound together by their love for classical music, enthusiasm to be challenged and desire for inspiring others.

The OJPA´s members, every year have to pass an audition to be accepted in the orchestra. Under the guidance of their conductor, renowned soloists, and distinguished guests, with a team of professional tutors the young musicians of the Alicante Region are having a unique opportunity to improve and complete their musical learning experience within the orchestra.

With the dedication to strive for excellence at technical mastery, artistic and self-expression, the OJPA´s Program consist of intense weekends-rehearsals in ADDA - Auditorio de la Diputación de Alicante, demanding repertoires, around 20 concerts per year presented in Spain and abroad and participation in Competitions, Festivals and Tours.

The OJPA is well appreciated for its regular Charity Concerts organized by Rotary-Clubs, for its engagement in the World and Europe-Premieres and collaboration with the Alicante´s region chorus, for the RNE (Spanish National Radio) record of the famous Mozart's Requiem as part of the campaign "one toy-one illusion", between others. The orchestra has been twice in charge of the Concert of Europe in Alicante.

In addition to its annual program, the orchestra´s highlights of the 2016 season will be its participation in the FIJO Alicante and SCL Festival. 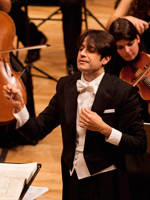 Francisco Maestre completed his conducting training in Spain under Maestro José De Eusebio and in St. Petersburg for three consecutive years, he was selected to participate in the Annual Conductor´s Program in with Master Alexander Polyanichko.

His commitment to Contemporary Music and Composers has led him to conduct many premiers by leading and emerging composers: the Spanish Premiere of the Concerto for Double Bass and Orchestra by R. Martinsson with the Berlin Philharmonic soloist Edicson Ruiz, Europe Premier of the Opera Oh My Son, Europe Premier of "Libertadores" by Oscar Navarro at MuTh Hall in Vienna and World Premiere of the Concerto for Guitar and Orchestra by Simone Iannarelli at the International Guitar Festival "José Tomás".

In collaboration with the Alicante´s Administration, he expanded the education programs to include new clinics, side-by-side concerts, competitions, festivals, Masterclasses, mentorship programs and continues to create innovative projects to engage communities, bringing vibrancy and blossoming collaboration to the musical culture in Alicante and abroad.

Among his commitments for 2016 are to conduct Valencia Orchestra, Philharmonic Orchestra of the Mariinsky Theatre, National Chamber Orchestra of Kazakhstan, joined by the soloists Aiman Mussakhajayeva, José Sempere, Edicson Ruiz…