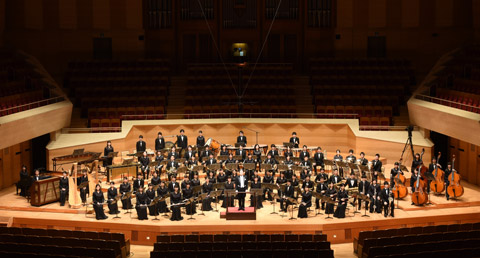 The Symphonic Band at Kanagawa University was established in 1938 as an extra-curricular activity which is an integral part of the overall university experience. Its members are carrying out performance activities in addition to the study at the faculty in which each majors. The band has a very active performance calendar, regular concerts twice in a year, performances for the function s of the university and a region, various wind music festivals and clinics, recording CDs and DVDs, marching in a parade, etc. And as one of the various activities, they participate in the All Japan Band competition. The number of gold prize which they won reaches 27 in total until now. It is the highest in the section of the university. The performance activities in overseas are, in 1990, tour to the U.S. by the College Band Directors National Association's invitation and having concerts at four cities - Minneapolis, Washington D.C., Los Angeles and San Diego, and in 1996, performing tour to Honolulu, Hawaii, in 2000, appearing to the 114th International Brass Concours in Valencia, Spain, won the second prize in the special division, and in 2003, participating in 11th WASBE Conference in Jonkoping, Sweden and 6th Mid Europe Festival in Schladming, Austria, in either case, they got a high valuation by performing the ir program of all Japanese excellent contemporary works, for that, in 2004, the band has been awarded the 14th Japan Wind Music Academy Award performance section prize from the Academic Society of Japan Wind Music. And they performed at final concert of the 58th Midwest Clinic for Band and Orchestra, Chicago, U.S., 2004. In 2008, they appeared and got 1st prize at the first section of the 37th Certamen Internacional de Bandes de Musica Vila d’Altea, Spain, and had the concert of the 150th anniversary of relations of Japan and France at Dunkerque, France. And 2012, the band made a successful concert in Berlin Philharmonie Hall, and also achieved the first appearance as a symphonic band to the Smetana's Litomysl International Opera Festival, the Czech Republic, and received high evaluation both. 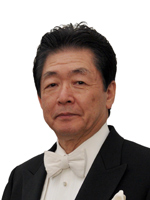 Toshiro Ozawa, born in Chiba pref., Japan. He studied trumpet with Kazuhiko Ogawauchi and harmony with Bin Kaneda. He was a founding member of Tokyo Brass Society and served as a concert master. As a trumpet player, he was performing in The Japan Philharmonic Symphony Orchestra and The Tokyo Philharmonic Orchestra. Also active in the educational field, he has been an instructor of Nippon Gakki Corporation (now, YAMAHA), and is now teaching numerous bands. In addition to his present position as musical director, conductor of Kanagawa University Symphonic Band since 1976, he teaches at Tokyo Music & Media Arts Shobi as a guest professor. He is also the representative and a permanent board member of Academic Society of Japan Wind Music and president of the Japan Band Clinic Committee and representative of 'Kyo-en' 21Century Wind Music. He has been awarded from the 5th Japan Wind Music Academy in 1995.