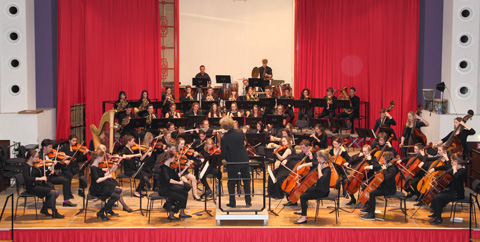 The Heidelberg Youth Symphony Orchestra (Jugendsinfonieorchester Heidelberg) was founded in the 1970s by Helmut Bielfeld. Unlike the other school orchestras, the young musicians are required to audition in order to take part. The Youth Symphony Orchestra prepares and performs a concert programme of original symphonic works each school year. It represents the highest level of the Heidelberg Music Schools many children’s and youth orchestras.

In 2008 a selection of string players from the Youth Orchestra, the „Young Chamber Orchestra Heidelberg“ won first prize at the German Competition for Chamber Orchestras under their conductor Thomas Kalb. Since 2009 he has been the Director of the Music School’s Heidelberg Youth Symphony Orchestra. 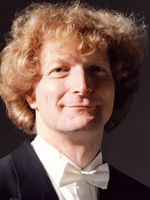 After eleven years in Heidelberg, Thomas Kalb turned to an exciting career as a guest-conductor. His many duties have included international concert engagements as well as long-term engagements such as an annual alternating production at the Bregenz Festival Theatre (Festspielhaus Bregenz) where he recently conducted 'Salome'. As a guest-conductor, Thomas Kalb has regular engagements with Symphony Orchestras and Opera Companies in international capitals such as Antwerp, Bayreuth, Berlin (Komische Oper), Birmingham, Bregenz (Festival Theatre), Bremen, Florence, Frankfurt am Main, Hamburg, Hanover, Luxemburg, Milan, Mexico City, Munich, Nuremberg, Schwetzingen, San Remo, Seoul and Tokyo. Furthermore, he also conducts numerous radio and television productions in Germany and abroad. Many premieres of both opera and concert strengthened his considerable reputation as a conductor of complicated and multi-layered scores.

Thomas Kalb's broad scope of activities has earned him many prizes and awards imcluding the Masefield Scholarship (1981/82), the Richard-Wagner-Scholarship (1986), the First Prize in the Conducting Competition of the German Council for Music (1987), the Prize of the German Music Publisher's Association for "Best Season Program" (1994/95) and the Prize from the Opernwelt for Best Orchestra Performance in Ligeti's 'Grand Macabre' (2001). He was also the music director of a production of Wagner's 'Tannhäuser' which was awarded the annual Prize of the Götz-Friedrich-Foundation for "Best Opera Production" (2004).

After Thomas Kalb won the Conducting competition of the German Council for Music in 1987, nobody less than Sergiu Celibidache was so impressed by his artistic abilities that he had invited him to conduct the Munich Philharmonic on the occasion of the 1989 celebrations of the 40th Anniversary of the German Basic Law at Beethovenhalle Bonn. This event was on air in a live-broadcast of the Second German Broadcasting Corp (ZDF).

Thomas Kalb studied piano, bassoon, conducting, composition and music theory at the State College for Music and Performing Arts in Hamburg. Already at an early age he received performance and conducting engagements at the Hamburg State Opera, the Eutin Summer Festival, the Schleswig-Holstein Theatre and the Ulm Theatre. Following his studies, he accepted the position of Principal Conductor at the State Theatre in Munich (1990-1992) and the National Theatre in Mannheim (1992-1994).

In 1996, Thomas Kalb created the music festival 'Heidelberger Frühling'. Under his artistic direction, this annual festival developed into an internationally highly acclaimed cultural event within a very few years.