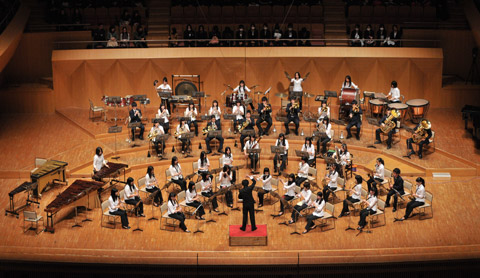 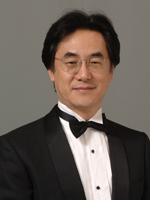 Akira Hasebe graduated from Tamagawa University, majoring in music and studying conducting with Chiyuki Murakata. He taught lower secondary school between 1982 and 1998, leading the band to the All Japan Band Competition five times receiving a gold prize in 1985. Hasebe produced joint concerts with the “Tokyo Wind Symphony Orchestra” in 1992 and 1998, was honored by the Children’s Culture, Theater, Performing Arts Academy and received the Minister of Health and Welfare Award in 1998.
In 1999, Hasebe began teaching in the upper secondary division (high school) and conducting the wind orchestra.
He has led the band to the All Japan High School Wind Band Conference in Yokohama 9 times (receiving 7 President’s Grand Prix Awards), the East Japan Band Competition in 2008, 2009, 2012, and international appearances at the World Music Contest Kerkrade in 2005 and Vienna’s Summa Cum Laude 1st place in the “Symphonic Band” category (2013).
Hasebe also conducts the Tamagawa University Wind Society and is a board member for the Tokyo High School Band Association and the Tokyo Band Association. 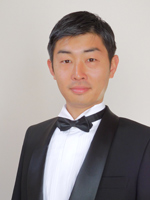 Naohiro Sonoda was born in Tokyo, 1985. He spent his 14 years in the system of Tamagawa Academy from kindergarten to secondary School. He played trumpet in the symphonic band club. He then studied in Kunitachi College of Music between 2004 and 2008, majoring in music performance and studying vocal music with Kei Fukui. After his graduation, he started teaching Seisa Junior High School as a general music teacher. He was appointed as a music teacher at the Tamagawa Academy in 2016.
Sonoda is also a conductor of the symphonic band.