Hans-Ulrich Henning founded the choir in 1979 together with pupils of the Christophorus School in Versmold. Key competency in the arts lies at the centre of the schools education system of the "Christian Association of Youth Villages".
The choir, with six hours of rehearsals, professional vocal training and frequent week-long choir camps, enjoys exceptionally good opportunities for development.
Thus, it is not surprising that the choir has won numerous first prizes in national and international competitions, amongst them the Grand Prix in Olomouc / Czech Republic in 1993.
Its numerous choral partnerships feature bilateral projects, like for example the German-Latvian performance of "Miserere" by G. Donizetti in the Riga Cathedral.
The choir has cooperated with WDR (West German Broadcasting Corporation) for many years, e.g. with the world premiere of a choral jazz piece, and frequently participates in its Christmas concerts.
In 1985, 2002 and 2010 the choir was a finalist in the German Choral Competition; in 1997 it represented Germany at the first International Youth Choir Festival in the cultural capital Thessaloniki.
In 2001 the choir was awarded the highly remunerative "Bruno-Kleine-Grant" for exemplary and lasting youth work.
In 2002, within the framework of the AMJ (Working Group for Music and the Young) project "Composers compose for children's and youth choirs", it gave the world premiere of a piece by the Munich composer Max Beckschäfer.
In 2004 the choir gave a guest performance in Kaunas in Lithuania as the only amateur ensemble at the "IX Pazaislio Muzikos Festivalis“.
In 2006 the choir was selected for the "6th International Youth Chamber-Choir-Meeting Usedom".
In 2007 the choir represented Germany in Aberdeen, Scotland, at the world-largest Youth Culture Festival "WORLD YOUTH FESTIVAL OF ARTS".
2009 the choir represented North Rhine-Westphalia during the German Festival "Schools Make Music" in Hamburg.
The choir also is the Winner of Goldmedal and Special Award for best dramatics at the IV. International Festival of Advent and Christmas Music, Bratislava.

The programs of the Christophorus Youth Chamber Choir include sacral and secular choir pieces from the Renaissance to the modern music as well as sophisticated arrangements of the light music - from a cappella to the pieces accompanied by the orchester.
The vocal diversity confirms that at all times and in all places the singing is accorded a special social value - in line with the choir motto: "Singing is breathing, breathing is living!"
The spiritual repertoire includes compositions to praise God: from "Exultate Domino“ by Scarlatti (16th century) to the modern "Cantate Domino" by Miskinis or "O be joyful" by Rutter.
The secular literature choice is also characterized by the diversity of styles and periods of the choir music. The internationality of the choir shapes its repertoire (see homepage); pieces from many different countries are performed in their original languages! 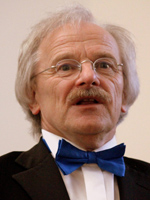 Choir director ICV Hans-Ulrich Henning obtained his first choir experiences from 1961 to 1969 in the boy choir of the Stiftskantorei Gütersloh. Mr. Henning studied music education from 1969 to 1974 at the University for Music and Theatre in Hanover (choir and orchestra conducting with Professor Heinz Hennig).
From 1975 to 1980 vocal studies with Professor Peter Ziethen at the College of Music Detmold (Dept. Münster). Mr. Henning successfully concluded his studies with the national vocal teacher examination.