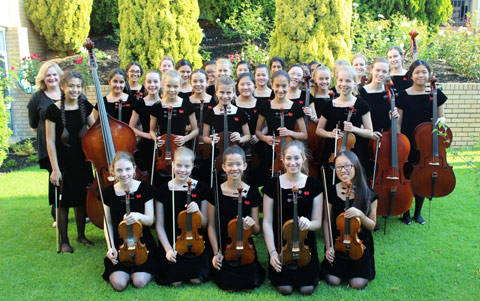 The Penrhos College String Orchestra is a student orchestra of girls aged between the age of 12 and 17 from Penrhos College, in Western Australia. Paul McCarthy is the Penrhos College Director of Music, with the strings under the direction of Mrs Jane Johnston. Penrhos College has a strong background of producing professional musicians with many students going on to national and international careers over for the past few decades. Each year the girls perform regularly at numerous events in the College and around Perth, Western Australia, and for the last four years have had the honour to perform at Government House for the Commonwealth Youth Day Rally, in the presence of the Governor, as well as providing an annual recital series at St. George’s Cathedral.

In 2010, the Penrhos String Orchestra performed at the International Music Festival in Sydney. In 2013, the Penrhos String Orchestra toured to Washington, New York and Los Angeles. The orchestra students participated in masterclasses with Dennis L. Johnson, the Director of Bands and Orchestra, and Associate Professor of Music at Murray State University in Murray, Kentucky. In their John F. Kennedy Center for the Performing Arts performance at the 2013 Washington D.C International Music Festival, the Penrhos College Strings and Chorale were awarded Gold. 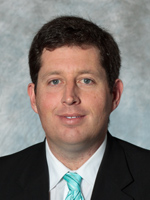 Paul McCarthy is currently the Director of Music at Penrhos College, having previously held music directorships at Sacred Heart College, Mazenod College and Guildford Grammar School, in Western Australia.
After receiving a music scholarship to Perth Modern School and completing his Bachelor of Music Education degree at the University of Western Australia, Paul has worked extensively in the field of music performance and music theatre in addition to his role as a Director of Music.
In addition to music directing school and community theatre productions, his recent professional performance credits include performing as a keyboardist in National touring productions of Wicked and the Cameron Macintosh production of Miss Saigon. Paul received a NEITA award nomination for National Teaching in Excellence and has adjudicated numerous music festivals around the state of Western Australia. Paul was a Western Australian representative at the National Review of Music Education, and is a current AISWA representative on the Music Course Advisory Committee (CAC) for the Western Australian School Curriculum and Standards Authority (SCSA), a WACE performance examiner, member of the ASME State Council, and an appointee to the WACE Music Examination writing panel. Paul has presented clinics on music education in his home state of Western Australia, nationally in New South Wales, South Australia, Queensland, Victoria, and internationally in New Zealand and the United States.
Paul is delighted to co-conduct the Penrhos College String Orchestra for their 2016 Europe Music Tour. 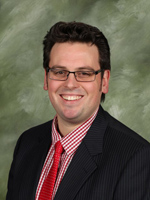 Jason Kidd’s music education began in 1989 at the age of 9, learning violin under Pam Pougnault, and in 1992 was a member of the inaugural String Orchestra as a student at Hale School (Perth, Western Australia). Jason graduated from Edith Cowan University (Perth, Western Australia) in 2006 with a Bachelor of Education.
Jason has been fortunate to study under some of Australia’s best musical educators, and perform on international stages. As a violinist and violist he has performed with the Metropolitan Symphony Orchestra, as well as tour through Europe performing in venues across Hungary, the Czech Republic and Poland, as well as number of venues across Perth. As a choral singer Jason has been fortunate to perform with the Western Australian Symphony Orchestra Choir. He has also toured as a chorister performing across Germany and Vienna, with highlights including performances at the Gewundhaus and Thomaskirche in Leipzig, Germany. Jason has also worked as a violin and viola tutor since 1997, and directed choirs and orchestras at a number of schools across Perth, Western Australia.
Jason is currently employed as Junior School Music Coordinator, and teaches primary classroom and choral music at Penrhos College. Jason also directs all Junior School Choirs, and the Junior School Orchestra at the College, as well as co-conducting the Penrhos String Orchestra for this tour.