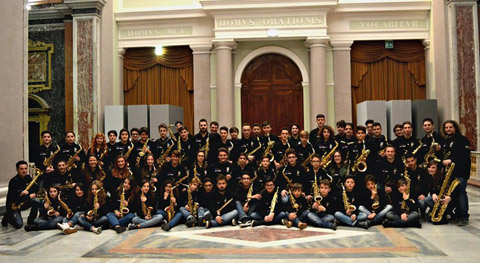 Orchestra of young saxophonists formed by children aged 10 to 23 years all students and alumni of secondary schools specializing in music. Founded in 2012, the orchestra immediately distinguished for its quality and for its very eclectic repertoire, in fact, together with the young tutor already experienced musicians who can guide them and integrates them in an engaging ranges from the most 'classic tracks' at popular repertoire treated with irony and virtuosity. Mentors (teachers) who guide them are: Domenico Luciano, Luigi Cioffi, Angela Colucci, Nicholas De Giacomo and Adolfo Alberto Rocco. The SONORA JUNIOR SAX, newly formed association SOUND PROJECT Core Network & Perfoming Arts adheres to the System of Orchestras and Choirs Youth and Children in Italy is guided and directed by saxophonist Domenico Luciano. The project of the Youth Orchestras System and Cori was born almost six years ago at the instigation of Maestro Claudio Abbado on example of the Venezuelan, with the aim to offer free music education to children throughout Italy and through it to give them an opportunity for personal growth and social redemption. the Italian system supports in its educational activities about 6,000 children aged between 4 and 23 years throughout Italy.
In particular, the SONORA JUNIOR SAX, aims to attract more young people to the world of music and through the same, creating among boys, relationships, friendships and expand their cultural knowledge, helping them in their particular training period. It was experienced that the music depth and in particular the participation of an orchestra, has greatly helped the boys to self-esteem, the correct and healthy competition and respect for others, although less gifted musically, there is always availability for the newcomer; the orchestra as a pedagogical tool. Regular meetings for the exercises, are expected from the boys as feast days, even enduring some discomfort and some insecurity. Dedication and love for the music transmitted from the masters, he created the group, moments of communion that continues even beyond the musical encounters. The boys begin to create small musical groups bringing their experience in the orchestra. Unique Sonora in their training, as made up only saxophones, are enjoying considerable success with critics and audiences. Have performed on the most important stages of Italy, including the Auditorium Parco della Musica in Rome, in Fermo part of XVIII, XX and XXI International Saxophone Stage, where one of the protagonists were "i M Masters . Mazzoni, F. Mondelci, M. Marzi, M. Gerboni, L. Mlekusch, F. Martinez), the Museum of Capodimonte, at the Little Theatre for the inauguration of the same, and in the Church of San Giovanni in Naples. They performed also at the Overseas Exhibition in Naples, Pisa, from V to 'eighth edition of the Festival Sax Serino (AV), the Certosa di Padula (SA), Sorrento (NA), Castellabate (SA) etc ... 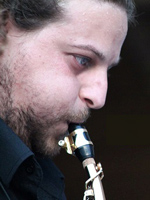 He graduated in saxophone with the highest marks at the Conservatory "D. Cimarosa "of Avellino in the academic year 2001 under the guidance of Maestro Marco Vanni. In 2009 he graduated from II level instrumental A077; later, in 2013, at the Conservatory U.K. Pergolesi in Fermo, under the guidance of Maestro Massimo Mazzoni graduated from II instrumental level in saxophone solo to address. With the same master had done master classes and currently acts as his assistant at the International Course of specialization of the saxophone. He continued his studies by participating in various master classes of masters: F. Mondelci, M. Marzi, J.M.Londeix and C. Delange. He has performed in several European countries such as: Russia, Germany, France, Bulgaria, Romania, Croatia, Moldavia, Albania and so on. enjoying great success with audiences and critics by proposing original compositions in concert, unpublished and arrangements. In Italy he played for festivals and most prestigious theaters like: Ravello Festival, Festival of Nations in Città di Castello, of Dawn Festival in Crotone, villas Festival Vesuviane Naples, within the International Stage Saxophone held in Fermo from XVIII the XXI edition; has since performed as a soloist at the Petruzzelli theater in Bari, Garibaldi theater in Enna, theater Reggio di Torino, Rossini Theatre in Lugo, Teatro Manzoni of Pistoia and Auditorium of Music Park Roma.Ha assets participation in numerous national competitions and international, about thirty of which he has won twenty-six and always placing the first places in the other. And 'it inserted in the roll of the TIM gold as winner of the 1st prize in the category horn soloist in the twelfth edition 2006. important collaboration is the one with Eugenio Catone with whom he formed the 2Agorà which quickly won favor with critics and audiences. Since this year is the endorser Légère one of the most renowned and important companies of Reeds in the world with offices in Canada and with whom he started a strong collaboration. He 'also the director and founder along with his colleagues of the orchestra tutors SONORA JUNIOR SAX with which in a short time has been a great success performing the Auditorium Parco della Musica in Rome with artists such as Morricone, Piovani, Bosso, etc. He has authored the publication of several works on records, including Funny Sax, Sax in the city, Spaxiamo. E 'out a CD with the 2Agorà (saxophone and piano) .Currently besides numerous concerts held master classes and teaches at the I.C. "G. Palatucci "Montella (AV).