In order to foster interest in art education, inspire students’ art potential and enhance esthetics appreciation and value, Fuhsing established “Art and Humanity Center” in the spring semester, 2007. The core values of the center are “responsibility, respect, gratitude and creativity.” With practical and multiple aspects of curriculum, we expect to inspire students’ creativity. Through interesting and creative teaching plans, students will develop the ability of art appreciation and performance to enrich lives and souls.

In order to develop multiple competencies, Fuhsing String Orchestra was established in 2008. The goal is to inspire students’ music potential and cultivate students with music talents. Professor Yung-Ching Chen is the conductor. With parents’ support and Professor Chen’s guidance, these passionate and gifted students develop in the learning environment with wonderful melody.

Fuhsing String Orchestra is divided into two groups: High School group and Elementary School group. The Elementary School group is formed by 3rd to 6th graders. They usually perform at school’s big events, like school anniversary and teaching performance. Besides, they also attend many competitions held in Taipei city. At the end of the semester, Fuhsing String Orchestra holds audition in order to recruit students with great interest in music. Together we share and compose music with passion.

The following events were what Fuhsing String Orchestra performed for the public:

- In 2010 and 2011, Fuhsing String Orchestra performed in Taipei Zhongshan Hall.

- In January 2014, they went to Sun Moon Lake and shared the love and passion through their performance to all the audience.

- In 2015, Fuhsing String Orchestra performed in The Hall of CPC Corporation.

- In 2015 summer, Fuhsing String Orchestra performed in Los Angeles Disneyland and Westmont College in US. 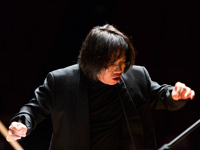 In 2010, he received 15th Best Alumni Award from National Taipei University of Education.

Starting in 1997, Mr. Chen established “Voices of Spring Symphony Orchestra” which is one of the biggest amateur orchestras in Taiwan, with which he regularly has held various performance at National Concert Hall in Taiwan, Taoyuan Cultural Center, Zhongli Arts Center and has collaborated with world-renowned musicians such as Sergey Kuznetsov, Igor Volochine,Vitaly Berzon, Kim Jung- Ah, Daming Zhu, Chih-Chang Hsueh, Andrei Yeh,Chien-ying Yang and others.