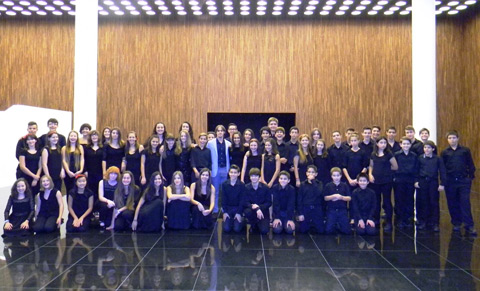 The Orquesta de Aspirantes de la Provincia de Alicante was founded in October 2012 in order to disclose and encourage the infant musical talents in the Alicante region and nurture the OJPA, the Alicante´s Youth Orchestra. Conducted by his Chief Conductor Juan Miguel Antón García the orchestra is currently integrated by musicians aged between eight and fourteen years and belonging to the music schools and conservatories throughout the region of Alicante.

The Orchestra is formed by 70 young passionate musicians who passed the annual audition held in October each year at Alicante´s main auditorium, ADDA.

Teaching and passing on expertise in orchestra’s performing technique and rehearsal, discipline, as well as performing the standard symphonic repertoire adapted to each one of the different instrumentalist´s levels are some of the goals that allow us to provide the older ensemble, the Youth Orchestra, with new and truly formed members. Both orchestras, the infants and the youth orchestra, work together in order to obtain similar goals at completely different ages and performing levels.

The infant musicians take part in all the events that the Youth Orchestra organizes, such as Master Classes, joint rehearsals. Besides, the orchestra offers frequent possibilities to some of its members to play solo concertos with the Youth Orchestra, being initiated as soloists among their own fellows.

The Orquesta de Aspirantes made its debut concert in June 2013 in the ADDA, with a full audience of over 1.300 seats. In its first concert, some of the members of the older Youth Orchestra also participated in the event, serving as a guide and tutelage of the younger musicians.

Last March the orchestra also held several events at Alicante´s Hospital General Universitario for children who are treated there. Specially commented was the concert for the Pediatric Oncology Department, designed through the project entitled “La cultura y el deporte se ponen la bata y el fonendo” commanded by the Hospital’s Pediatric Department. Besides those concerts, the Infant Orchestra also developed several music workshops at the Hospital´s School for those children who mainly live indoors at the Hospital, getting them to know, practice and get acquaintance with all the orchestral instruments. The other event was a benefit concert to obtain economic aid for the Asociación de Enfermos Mentales de Elda-Petrer y comarca.

For the second consecutive year they performed together with the older Youth Orchestra in the 3rd Alicante´s International Youth Orchestras Festival (FIJO) celebrated last August 2015. 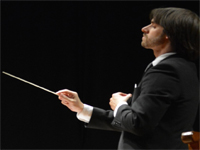 Juan Miguel Antón García was born in Alicante, where he developed his main musical studies at Óscar Esplá Conservatory with Professor Vicente Antón, finishing his studies with the highest qualifications and honor.

As a violinist, he has been a member of the Murcia Youth Orchestra, the Comunidad de Valencia Youth Orchestra, performing in the main halls throughout Spain. He has participated in a tour performing with legendary cellist M. Rostropovich in the summer 2003, at that time he also collaborated with Frolov Chamber Orchestra, and the Orquesta Sinfónica de la Región de Murcia.

Juan Miguel Antón García is holding a Master Degree in Performing and Researching on musical Andalucism and Alhambrism.