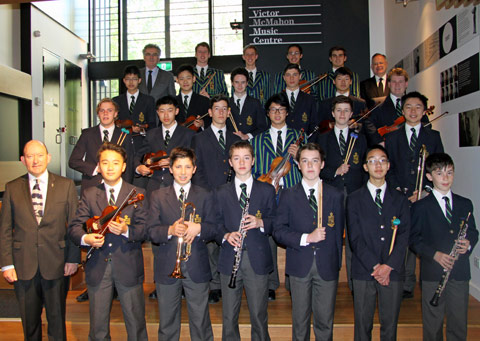 St Kevin’s College is a large P-12 Catholic school for boys in the Edmund Rice Tradition. The College is proud to say that it is a “school which sings” and has a high participation rate in its music program.

A strong classroom music program is complimented by a string program in Year 3 and a band program in Year 5. These programs introduce the students to the wonderful world of music performance. Senior ensembles include chamber ensembles, choirs, orchestras, concert bands and jazz ensembles. With whole-school singing and specialist ensemble performances included in the weekly Assemblies, music is a central part of life at St Kevin’s College.

Over 30 concert performances are held each year in venues including Hamer Hall, Deakin Edge and the Melbourne Recital Centre. Rehearsal camps for primary and secondary students include over 400 students each year. The Orchestras and Concert Bands participate in the Victorian School Music Festival each year and the four Big Bands regularly participate in the National Stage Band Awards. The St Patrick’s Cathedral Choir forms a core group within the College’s choirs.

St Kevin’s College has a long tradition of music tours within Australia, but this is the College’s first international tour. The European Tour ensembles have been formed especially to provide some of our students with the opportunity to perform on the international stage alongside students from around the world. 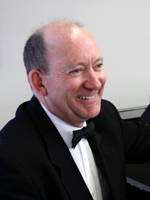 Simon Harris undertook post-graduate studies in conducting and clarinet at the Victorian College of the Arts, Melbourne, with Phillip Miechel, Robert Rosen and Graham Abbott. He then continued his clarinet studies in Germany and England with Wolfgang Meyer, Thea King and Antony Paye. Simon commenced his teaching career at Ivanhoe Grammar School, where he taught instrumental and classroom music for more than eight years, including leading a concert band tour to New Zealand. He was the conductor of the Robertson Youth Orchestra from 1994-2000, including its tour to Fiji in 1996. After working as the Orchestra Librarian for the Melbourne Symphony Orchestra, Simon joined the staff of St Kevin’s College in 1998, where he has been the Head of Music since 2001.