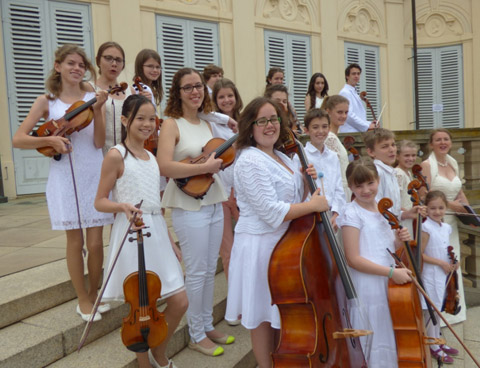 Founded in 2008, the Youth Baroque Orchestra „Die Telemänner“ have acquired a name for performing baroque music with a modern twist. Inspired by the music from the baroque era, the young musicians bring together original baroque music and modern music. The ensemble is ambitious to show links between baroque and modern music and has also developed modern percussion concepts and arrangements for original baroque works. During the last years, many modern compositions have been dedicated to and premiered by this ensemble as well.

The ensemble was portrayed by the Deutschlandfunk (2008) as well as by the Hungarian radio Station MR4 (2010) with its conductor Steffi Bade-Bräuning. The ensemble was invited many times to perform at the baroque/ rokkoko castles of Ludwigsburg, Solitude (Stuttgart) as well as Schwetzingen. Concert tours took the ensemble to Budapest and New York City. In 2014, Die Telemänner performed at the renowned Musiikkitalo Helsinki, in cooperation with the Finnish Baroque Orchestra (FiBo).

The young musicians appeared in a production of the State Film Institute Baden-Württemberg in 2014 and 2015 (youtube “Geigenkrieg” and “Musikvideo-Fight”). Moreover, they won a second price at the European Music Festival at Neerpelt/ Belgium in 2015. It was the first time for the musicians to participate in a competition. At the State Orchestra competition of Baden-Württemberg they turned out among the best four ensembles of their category.

Die Telemänner play with baroque bows as well as on a spinet which is a copy of an instrument from the times of Elisabeth I. (www.gedok-stuttgart.de) 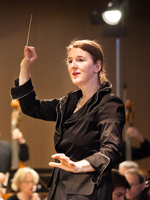 Steffi Bade-Bräuning finished her studies at Hochschule für Musik Köln in 1997 and continued her studies in Masterclasses with Joshard Daus, Helmuth Rilling and Salvador Mas Conde. She was Head of Music at the German School Singapore from 1999-2003 and artistic director of the National University of Singapore Society (2001-2003). The Singapore Lyric Opera engaged her as choir conductor for its production of Bizet’s “Carmen” in 2002. As a jury member, she was invited in three consecutive years to the national competition of school choirs in Singapore “Central Judging of Choirs”.

2005 and 2009 Steffi Bade-Bräuning conducted two CD-productions with the Franconian Children’s Choir in cooperation with the Bavarian Radio Station. The Youth Baroque Orchestra „Die Telemänner“ was founded by Steffi Bade-Bräuning. She is the artistic director of the University Orchestra Esslingen and has recorded Ney Rosauro’s Marimba concert among other works. She conducts the Esslinger Liederkranz e.V. 1826, of which she is the first female conductor.

Bade-Bräuning has conducted numerous international music projects in Italy, France, Hungary, Hong Kong Singapore and the USA and was nominated for the Marion Doenhoff-Preis in 2003 for her achievements of international understanding through music.