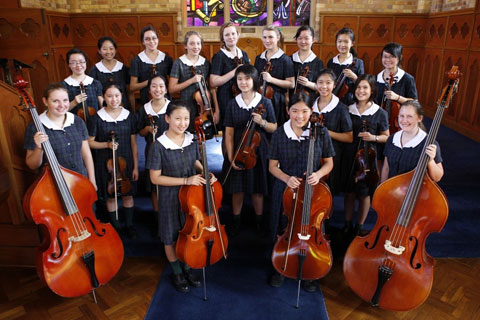 The Pymble Ladies’ College Chamber String Orchestra is a select orchestra consisting of advanced players from Years 7 – 12.  Many of the performers here have begun their string studies in the comprehensive String Program which begins at Year 3 in the College.  The Chamber String Orchestra has enjoyed numerous successes in competitions and festivals both in Australia and internationally.  During 2008 the Chamber String Orchestra had the honour of performing alongside the Australian Chamber Orchestra led by Richard Tognetti at our newly opened state of the art Gillian Moore Centre for the Performing Art as well as participating in workshops with them. They have also been invited several times to be guest artists for AUSTA (Australian String Teacher’s Association).  The Chamber Strings plays a diverse range of repertoire from the 16th Century through to contemporary compositions. This year we have been very fortunate to have been able to include the use of Baroque bows and electric string instruments into our performances – both of which will be featured in this festival. During 2009 we will be premiering a work by Sylvia Lim, a Year 12 student in at the College.  The work juxtaposes the old against the new; with the Concerto Grosso form being used and the continuo instruments being an electric violin and an electric cello. 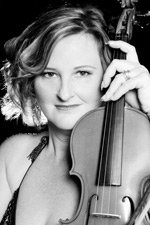 At the age of 5 she was part of a pilot program for only 2 schools in Australia in the 1970’s to make music an integral part of the curriculum through the teachings of Kodaly, under Dr Deanna Hoermann. Part of this program implemented string teaching. After graduating with Merit from the Sydney Conservatorium of Music, Mrs Colbey conducted and coordinated many State school combined performances at the Sydney Opera House and Sydney Town Hall. Mrs Colbey was also responsible for the String program at State School Music camps for both secondary and primary school players. Mrs Colbey has worked and studied with Australian and international string tutors and conductors, including Dr Michael Heaney, Jan Sedivka, Henryk Pisarek, Christopher Kimber and Harry Curby. As the Head of Strings at the College she is responsible for the implementation and direction of the String Program from Years 3 – 12. Her passion is music and her string girls. Mrs Colbey has performed with both classical and popular artists both in Australia and internationally. She believes that it is important to bring the best of diverse musical performing opportunities to her students. She has been instrumental in making it possible to have both electric string instruments (including a newly formed electric string quartet) and authentic Baroque performances (including custom made Baroque bows) at the College.