The New Born Kosova Choir was established in the first year of Kosovo independence, after which it was given its name. It is composed mostly of students and young people from different parts of Kosovo. The new ensemble has a broad repertoire and includes many vocal works of the most prominent international and national composers of different periods, from the early renaissance to contemporary music. The ensemble is derived from the Vocal Ensemble “Okteti Plus”, a vocal male group established five years ago. For this relatively short time it has achieved significant success in Kosovo and neighboring countries and has participated in almost all of the festivals of classical music in Kosovo, Albania, Macedonia and Croatia. 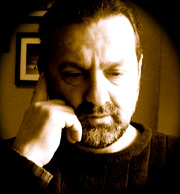 Ylber Asllanaj graduated at the Faculty of Arts of the University of Prishtina with a major in musical pedagogy and is currently completing his last year of studies in conducting. From 2000 to 2004 he was the conductor of the Children’s Choir of Prishtina. He is the founder of the Ensemble “Okteti Plus” (2004) and of the New Born Kosova Choir (2009) and has performed in many concerts, festivals and other musical events in the region. Furthermore, he has conducted the Kosovo Philharmonics and is currently a vocal professor at the Secondary Music School in Prishtina and full time member of the Choir of Kosovo Philharmonics.