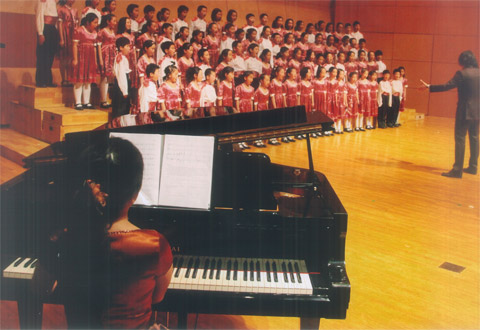 The “Nine o’clock Sunshine Choir” of China Beijing Zhongguancun No.1 primary school developed from the former children’s choir in 1996 and is now comprised of 120 girls and boys aged between eight and twelve. The choir is divided into categories and practices around the year, taught by the art-director, well-known vocal professor Zhang Shirong. The choir’s conductor is Zhang Jianning, aided by the chaperones Liu Xiaojing and other music teachers.

In recent years, through the effort of the headmaster Liu Chang, the choir has advanced rapidly and achieved Beijing Students Choral Festival and Haidian District Choir competition first prizes successively in 2006 and 2008. The choir also actively takes part in a variety of performances, such as the kick-off ceremony performances of the 2008 Beijing Paralympics’ Games, the „Thanksgiving Mother“ charity party and the annual special concert of the school’s art festival. 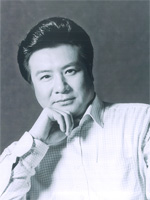 Zhang is a well-known expert in child’s voice training and the current art director of Affiliated Secondary School to Chinese People’s University. With his unique choral training methods for both adult and children’s voices, he has tutored choirs in Affiliated Secondary School to Chinese People’s University from 1984 to 2002, many of which have won numerous national and Beijing municipal first prizes. He was invited to Hong Kong and Taiwan for lectures and performances on numerous occasions. He is the author of “Zhang’s Child Vocal Training”, introduced by Mr. Nie Zhongming, Chairman of the Chinese Chorus Association and a celebrated conductor, and described by Professor Wu Lingfen, head of the conducting department of the Central Music Academy, as “ a must-read in the field of vocal and conducting education”. He left the Central Symphonic Orchestra in 1998 and assumed the position of director of vocal teaching and research in the department of arts at the Central Culture Administration Personnel College. Furthermore, he is currently the choral conductor in the PLA political Department Chorus Society.