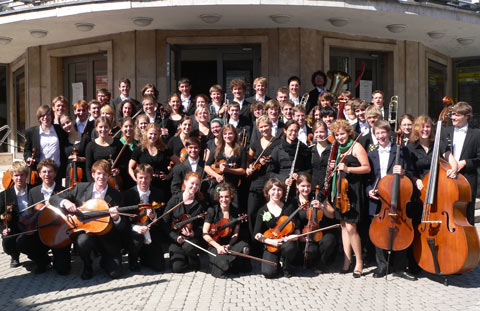 The Odeon Youth Symphony Orchestra was founded in october 2006. Its musicians in the age of 15- 25 originate from the Munich metropolitan area and have to prove their musical competence prior to become accepted as a member of the orchestra.
Quite a lot of the musicians have already received awards in competitions like "Jugend musiziert" on federal & regional level. Nevertheless each interested young person can apply for membership in the orchestra. The orchestra regularly meets for training once a week for 3 hours and on top of this once or twice a year in the Munich area as well as abroad in summer.
The orchestra presents four programmes a year spread over the four seasons and performs mainly in schools but also in major concert halls including the Munich University "Aula". In 2007 the orchestra performed in Hungary. In august 2008 performances in Chile are planned.
The orchestra practices professionalism in each respect as well collective and / or individual support under the professional assistance by members of the Munich Philharmonic Orchestra all this under the leadership of Julio Doggenweiler Fernandez who is the musical director and the conductor in resi-dence since the orchestra was founded.
The programme presented by the orchestra includes symphonic music from all periods with a particu-lar emphasis on modern or contemporary music.
The Odeon Youth Symphony Orchestra is proud on having received in november 2007 the "Bavarian Orchestra Competition Award" with outstanding success and thus has qualified for the "German Orchestra Competition" which will take place in mai 2008 in Wuppertal. 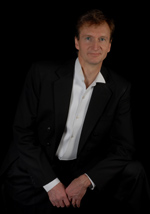 Fernandez was born in Santiago di Chile. After transverse flute studies at the Musikhochschule Hannover and further studies in New York he was for five years first transverse flute soloist of the Orquestra Sinfónica di Chile. From 1990 to 1994 he studied conductorship at the Musikhochschule Munich with Professor Rolf Reuter and Professor Hermann Michael followed by master courses with Sergiu Celibidache. Julio Doggenweiler Fernandez was semifinalist of the conductorship competition "The Masterplayers "at Lugano / Switzerland. As from 1992 he conducts regularly all reputed orchestras of his home country Chile and of Argentina. He is regularly guest conductor of the Orquestra Sinfónica de Chile and the Orquestra da Camara di Chile. As from 1997 he conducts the concerts of the Germering chamber choir at the Germering townhall near Munich. The repertoire ist remarkable and includes of Johann Sebastian Bach the Christmas Oratorium, the St. Johns Passion and the St. Matthews Passion, of Georg Friedrich Händel the Messias, of Christoph Willibald Gluck the Orfeo ed Euridice, of Wolfgang Amadeus Mozart the Requiem, of Guiseppe. Rossini the Stabat Mater and the Petite Messe Solennelle and of Carl Orff the Carmina Burana. Julio Doggenweiler Fernandez is a promotor of the contemporary music of his home country and has performed for the first time various works of composers of Chile. His concerts are regularly transmitted by the Chile Broadcasting Corporation. As from october 2006 Julio Doggenweiler Fernandez conducts the Odeon youth orchestra Munich and is together with Wolfgang Berg the art director of the Odeon Association