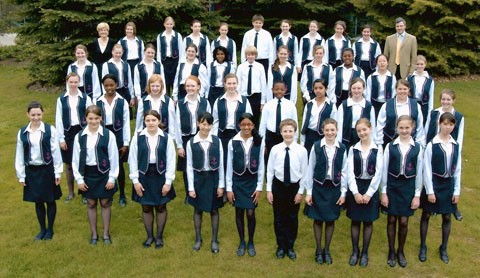 The Mississauga Children’s Choir provides exceptional musical experiences through excellence in performance, education, touring and community service.  In its 27th season, and with 140 singers, the MCC has established a wide reputation for its creative programming and commitment to new music.

In addition to numerous engagements in the city the MCC presents two annual major concerts in Mississauga’s Living Arts Centre, and frequently performs with top regional symphonies and ensembles. The MCC received the 2005 Mississauga Arts Council award for Established Performing Arts Groups, and were semi-finalists in the 2006 CBC National Choral Competition, Children’s Choir.

The senior ensemble, the Concert Choir, has traveled throughout eastern Canada, including participation in Newfoundland’s Festival 500, and, in western Canada, at the Coastal Sound International Choral Festival, British Columbia.  During 2005 they toured England, performing at St. George’s Chapel in Windsor Castle, Salisbury Cathedral and The Queen’s College, Oxford.

In 2004 the MCC established the first Mississauga Choral Festival for youth choirs.  This initiative has welcomed hundreds of young singers from many parts of Canada and the USA to sing with distinguished conductors such as Simon Carrington, James Litton and Stephen Hatfield. In 2010, Bob Chilcott will conduct.

Many leading composers have written for the MCC, including Stephen Chatman, Bob Chilcott, Michael Coghlan Stephen Hatfield, Ruth Watson Henderson, Nancy Telfer, and the late Srul Irving Glick. These works have recently been released on a CD, Our Own Drum. The inherent vitality in this new music finds a perfect match in the quality of music making for which the choir is renown. 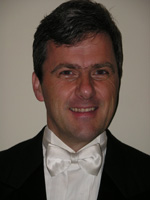 Thomas Bell has been the Music Director of the Mississauga Children's Choir for the past 11 years. He enjoys a multi-faceted career as a conductor, teacher, church musician and composer. He began his musical education as a chorister at Salisbury Cathedral, England, later studying music at Durham University where he was taught the flute for many years by Patricia Morris (BBC Symphony).  Thomas taught at the London College of Music, and New College Choir School, Oxford, before immigrating to Canada. In addition to his work with the MCC, Thomas teaches music at the Toronto French School, and is the Organist and Choir Director at St. Jude's Anglican Church, Oakville. His choral compositions are published by Boosey and Hawkes, Alliance and GIA. 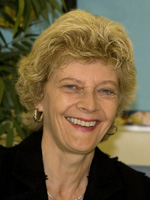 Celene Staveley, pianist and accompanist, has worked with choirs since 1969. She studied accompanying at the Royal College of Music in London, England and at the Faculty of Music, University of Toronto.  She has played for a variety of choirs and artists covering a wide genre of classical and popular music. She is currently a music teacher with the Peel Board of Education.