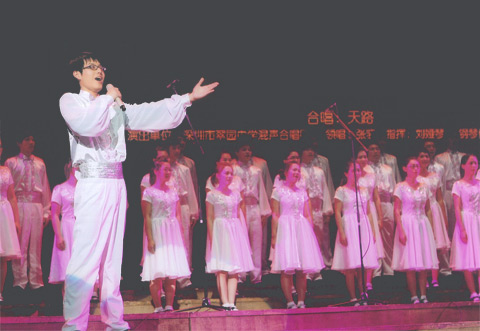 Established in the 1980’s, the choir has made unremitting efforts and received many honours and is presently one of the top ranked among the secondary school student choruses in Shenzhen.
The school’s boys’ choir, directed by Miss Liu, is the only chorus of its kind in Shenzhen. Since its founding, it was successful in numerous performances and competitions.
In the 8th Interscholastic Chorus Artistic Festival held in 2008 the mixed choir, currently one of the best in Shenzhen, received the first place and the golden prize for its program.
Further awards in recent years include first prizes at numerous festivals, such as the 3rd Interscholastic Artistic Performance Season and the 8th Interscholastic Chorus Artistic Festival in the Luhou district.
The boy’s choir also performed at the celebrations of the 10th anniversary of the Hong Kong Handover and at the Civil Literature & Art Joint Performance held by Shenzhen Education Bureau. 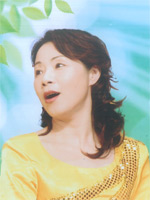 Mrs. Yaqin Liu, a former graduate of the vocal department of Hunan University in 1984, is the current academic head of music education in Shenzhen Cuiyuan Middle School. She is the choir master, vocal director and also the head of the secondary group in the Luohu Teaching and Research Section, Shenzhen City. She has worked as a teacher for more than 25 years. Miss Liu is constantly exploring new ways for music education and made great achievements in fostering students’ music attainment and human spirit. Her original series of activity, “Music Promotes the Development of Human Quality”, was highly praised for its contribution to finding new methods for talent cultivation. Under her guidance, the Children Chorale, Schoolboy Chorus, Mixed Chorus and Schoolgirl Chorus received awards in various competitions since 1997.

Y. Qing:“Road to Heaven”
Enkhbayar: “The Paean of Eight Steeds”

„You and Me / In the Night“
“Time will pass us by”
“O Sole Mio”
“Faraway Little Fishing Village”
“A World Filled With Love”
“Pur dicesti, O bocca bella, Gaoalitai”
“I Believe”
“Surpass the Peak / An die Freude”
“Etude”
Y. Qing: “Road to Heaven”
Enkhbayar: “The Paean of Eight Steeds”
Song Combination