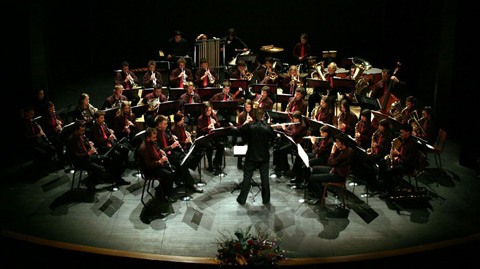 The Pihalni Wind Orchestra of Komen was founded in the spring of 1996 by Leander Pegan, at that time principal of the local music school of Komen. He was succeeded by Simon Percic, a rising conductor, under whose leadership the orchestra grew quickly to form a full wind orchestra.

In 2004, they won the national band contest of Slovenia even though they were the smallest and youngest ensemble in the competition. Currently, the orchestra has 50 members and performs approximately 30 times per year. The orchestra has had some major concerts in Ljubljana and won a number of national and international competitions, including the coveted international band contest in Riva del Garda in Italy in 2007 and 2008. The orchestra is very active in commissioning new Slovenian pieces for bands. 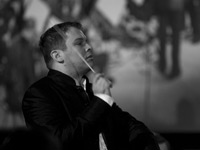 The conductor and artistic director Simon Perčič graduated at the Academy of Music in Ljubljana (trombone).
After graduation he perfected his studies with professors R. Bobo, A. Mazzucco and B. van Dijk. He cooperated with the Slovenian Philharmonic Orchestra, The Symphonic Orchestra RTV Slovenia.
He studied conducting with professor Jan Cober at the ISEB Institut and at maestro George Pehlianian’s and Douglas Bostock’s master class. He also concluded a one-year study in conducting symphonic orchestras with professor Jorma Panula in Florence.
He took part in international festivals in Lisbon, Valencia, Sao Paolo, The Wind Band festival in London, MID Europe and Eolia Strasbourg. Hi is artistic director of international »Orkesterkamp« and competition »UPOL’s Svirel«.