The SBO was founded in 2000 and is conducted by Mr. Leo Winter. The orchestra has 26 members who are between 12 and 19 year old. All of them have been playing their instruments professionally for several years and meet regularly for rehearsals. The purpose of the orchestra is to prepare the young musicians for a career in the professional local brass band. The highlight of the year is the annual spring concert, which attracts a lot of audience. 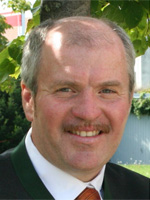 Leo Wittner was born in Vienna and is running a fram in Gramatneusiedl.
He started his musical career as a clarinet player at the age of 10 under Friedrich Wimmer. 1981 he was awarded the golden ‘Jungmusikerleistungsabzeichen’. From 1984 to 1989 he played 1st clarinet for the Lower Austrian Brass Band. In 1989 he won the ‘Golden clarinet’ at the Lower Austrian Brass Competition. He performed as a soloist for the Mödling Symphony Orchestra, the Music Association Gramantneusiedl as well as the Orchestra of Bruck an der Leitha.
He performed in Germany, Italy, Czech Republic and Japan. As head of the school brass band he contributed substantially to the training of young brass musicians in Gramatneusiedl.
He is a member of various chamber music ensembles, produces different CD recordings and appears regularly on local radio channels.