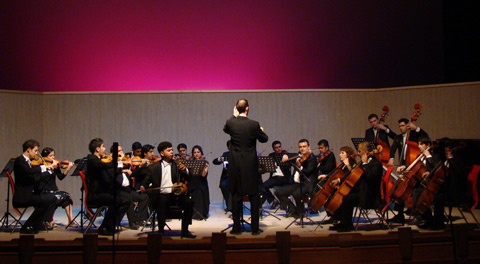 Ante Skaug started his education in music and percussion at the Foss Vidregående College, received undergraduate degrees in percussion education at the Norwegian Academy of Music in Oslo and in orchestral and choir conducting at the Royal Academy of Music in Stockholm, where he also studied choir and bigband conducting. In 2004 he received a postgraduate diploma in conducting with distinction at Trinity College of Music in London under Peter Stark. He has also participated in various courses and master classes in conducting held by Christian Eggen, Alan Gilbert, Esa - Peka Salonen, Mark Wigglesworth and Peter Stark.
He has played percussion for numerous orchestras in Norway, Sweden and the UK, such as for the Barrat Dues Symphony orchestra (Norway), St. Pauls Symphony Orchestra (London), the Sami Sinfionetta (Stockholm) and the Ålesund Baroque Orchestra (Norway).
Among others, he has conducted the SAMI orchestra, the Radio Orchestra, the Royal Opera Orchestra and Stockholm’s Philharmonic Orchestra, Drottningholms Baroque Ensemble and the Swedish Radio Choir. From 2000 to 2003 he was the head conductor of Vårkören, Stockholm. In 2004 he was guest conductor of the Southend Philharmonic Orchestra (England).
Other activities include a recording with the Norwegian Forces Band, a premiere concert of Symphonic Jazz Improvisation music for windband, with the Östgöta Wind Orchestra and charity concerts in Manila, Philippines, with the Manila Philharmonic and the Philippines Philharmonic.
He was the conductor and leader of the wind orchestra at the private music school „Lilla Akademien“ in Stockholm and is currently its head of the wind and brass ensemble.