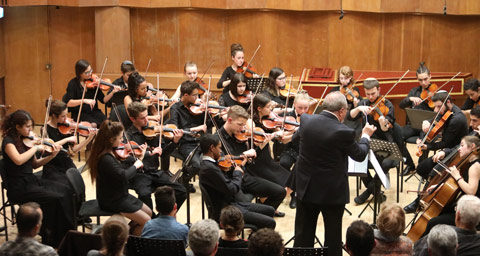 The Jerusalem Conservatory Hassadna String Orchestra, conducted by Prof. Michael Gaisler, is one of Israel’s premier youth orchestras. It brings together 30 students, aged 10 to 18, who have demonstrated the talent and discipline necessary for participating in an orchestra of the highest caliber. Prof Gaisler is one of Israel’s leading figures in string education. His artistic directorship and dedication to the orchestra has been the key to its success. The orchestra’s performances have been broadcasted on the national radio, including premier performances of contemporary Israeli compositions. The orchestra is also invited regularly to perform in festive concerts and events in Israel’s leading concert halls. The Orchestra had highly successful concerts during their tour to London, which included a festive concert with the Yehudi Menuchim String Orchestra at their beautiful and prestigious concert hall. For the Conservatory’s young musicians, the orchestra is a central part of their lives; a place for personal, social and professional growth. The orchestra is a place where everything blends together, where the unique human mosaic of Jerusalem is portrayed in its most beautiful diversity. Jewish and Arab students, religious and secular, children from the Ethiopian community, students from disadvantaged families and new immigrants from around the globe make music together. This is the place where we most successfully realize our vision of a musical home for all children. 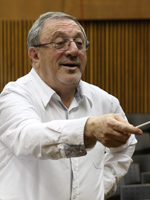 Michael Gaisler, Conductor Mr. Gaisler studied in Kishinev and in Moscow with Prof. M. A. Garlitsky, and holds a Master's Degree in Violin Performance and Pedagogy. Since 2005, Michael has served as Associate Professor at the Jerusalem Academy of Music and Dance, after serving as Associate Professor at Tel Aviv University (2001-5). Michael has taught Master classes and workshops in the U.S., Germany, Denmark, Spain, Russia and Romania. He also holds Master classes, private lessons and teacher’s seminars all over Israel. Born in Kishinev, Mr. Gaisler served as the Concertmaster of the Orchestra in the Opera House and professor of violin at the Music College, Kishinev. After immigrating to Israel he became violin and viola instructor, and chamber music coach at the Tel Aviv Conservatory of Music. Mr. Gaisler founded and directed a string orchestra comprised of students from both the Jerusalem and Tel Aviv academies. While teaching in the United States he served as Assistant Director, Professor of Violin and Chamber Music at the Academy of Strings, UCSD (1988-90) and Music Director and Conductor of "Strings of San Diego" (1990-2000),. He is also the founder and Music Director of the Southwest Music Institute. Many of Mr. Gaisler’s students have won national and international competitions and have continued their musical careers as soloists, orchestra players and teachers all over the world.