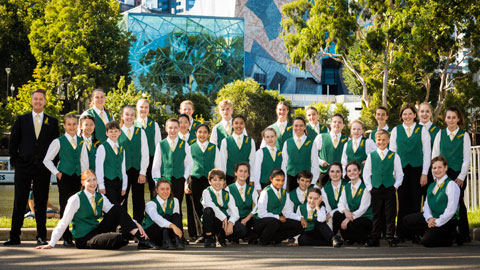 Founded in 1976, The Australian Children's Choir is widely regarded as one of the finest mixed-voice children’s choirs in Australia. Based in Melbourne, and consisting of boys and girls aged 6 -18 years old in 5 different training ensembles, the ACC has developed a strong reputation for its refined performances, varied repertoire and the production of fine young musicians, many of whom have gone on to pursue successful musical careers. The ACC has made regular international tours, to countries including the United Kingdom, Hong Kong, USA and Canada, New Zealand, Germany, Austria, the Czech Republic and China. In 2015 a tour of the USA and Canada included the Serenade International Choral Festival in Washington D.C, and performances in Philadelphia, Bethlehem NJ, Toronto, Niagara, Southampton NY and New York City. In 2016 the choir toured the East Coast of Australia, (Brisbane, Gold Coast, Wollongong and Sydney). The ACC regularly appears in concert with many of Melbourne’s leading musical ensembles, including the MSO, Royal Melbourne Philharmonic, Orchestra Victoria, and the Australian Army and Navy Bands. The choir is in demand throughout the year for important corporate, sporting and civic events, and especially at Christmas for various "Carols by Candlelight" concerts, and the highly popular "Carols in the Cathedral" concerts with Royal Melbourne Philharmonic. Recent recordings include the song for the Sanfilippo Children's Foundation “This Woman’s Work” (Sony International) and “O Canada” with leading Australian recording artist Missy Higgins. The choir has produced 6 CDs, “Leave No Song Unsung”, (nominated for an Australian Music Centre award for best choral recording); “Christmas Lullaby”, “Like a Rainbow; “Fire in the Heavens” (an album to mark the Australian ‘Black Saturday’ Bushfire tragedy); “Australian Stories: Songs of the Great South Land” (a collection of Australian choral works), and most recently a 2CD collection of sacred music from across 5 centuries entitled “Cantate Domino”. The young singers of The ACC’s senior choir meet twice a week to rehearse outside school, and receive many wonderful musical and social opportunities as young ambassadors for both their choir and country. 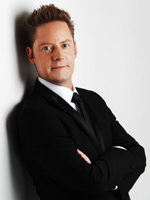 Andrew Wailes enjoys a busy career as a performer, adjudicator and educator in Australia. Since 1999 he has directed The Australian Children's Choir, and has led tours to countries such as New Zealand, China, the UK, Germany, Austria, Czech Republic, Hungary, Canada and the USA. This tour will include performances at the Summa Cum Laude International Youth Music Festival in Vienna, and in Munich, Salzburg, Prague, and Budapest. Andrew has directed Melbourne University Choral Society since 1992, and has been Artistic Director & Chief Conductor of the Royal Melbourne Philharmonic Choir & Orchestra since 1998, and conducts the Box Hill Chorale. For almost 12 years he lectured in Choral Conducting at Australian Catholic University, is a former conductor of the Australian Classical Players, Chamber Strings of Melbourne, and faculty choirs at Melbourne and Monash Universities, and the Melba Conservatorium. For 3 years he directed the award-winning symphony orchestra at Blackburn High School. He has appeared with international groups including the Stuttgart Radio Orchestra, Camerata Academica Freiburg and Orchester der Universität Stuttgart, Guangzhou Philharmonic, Yale Glee Club and Harvard-Radcliffe Collegium Musicum, and local ensembles such as Orchestra Victoria, Stonnington Symphony, and Monash University Orchestra. In 1999 he was the inaugural winner of the Australasian International Choral Conducting Competition, and has adjudicated competitions in China, NZ, USA and Australia. He has conducted operas for Chamber Made Opera and Lyric Opera of Melbourne and assisted Maestro Valery Gergiev as backstage conductor / extra chorus director for Kirov Opera's Melbourne Festival seasons. He has directed choirs for major events such as the opening of Sydney’s Olympic Stadium and Melbourne's Federation Square, and the Closing Ceremony of the 2006 Melbourne Commonwealth Games. In 2016 he was chorus director of the Royal Edinburgh Military Tattoo. A trained singer with many years of experience in various church and symphonic choirs, Andrew is also a former member of the National Youth Choir of Australia, and has performed professionally with groups such as Opera Australia, IHOS Opera, and numerous recording ensembles. 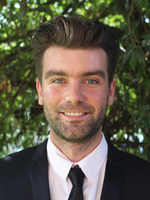 Adam Cook began his career in 2005, studying with the Australian composer Roger Smalley and pianist Anna Sleptsova at the University of Western Australia in Perth, Western Australia. Shortly after this, Adam was invited to complete a double-major in classical Piano Performance and Composition under Emeritus Professor Larry Sitsky and Geoffrey Lancaster at the Australian National University. Study at the ANU was temporarily interrupted due to an invitation to travel to France and study for one year with Emeritus Professor of the University of Ottawa, Jean-Paul Sevilla, and completed a Diplome d’Etudes musicales. Returning to Canberra, completing his Bachelor of Music, and beginning professional work in 2011 as the resident accompanist for the ANU, Adam also began teaching privately, performing as a classical chamber and jazz pianist, and receiving contracts as a composer/ arranger. Adam completed his first-class Honours degree in 2012, giving the world premiere of Sitsky’s Sonata No. 2, in three movements, composed for him. Adam also edited this piece, which is published under The Keys Press. In 2012, Adam was awarded the biennial Michael Kieran Harvey Scholarship, given to postgraduate piano students to help them further their career overseas. With this funding, Adam traveled to Paris in order to study composition and improvisation with several established Parisian pianists, and since returning to Australia, Adam has relocated to Melbourne and currently enjoys freelancing and contract work – as the piano teacher at Victoria University Secondary College, as piano teacher, and Head of Composition at Parkville Music School, and as Senior Accompanist with The Australian Children’s Choir. Adam also accepts work for arrangement / composition, transcription, editing, as well as classical, jazz and band performances. As a pianist, Adam has performed for several years running at the Canberra International Music Festival, and has also appeared at various festivals around Australia.