The Youth Orchestra Promúsica of Málaga 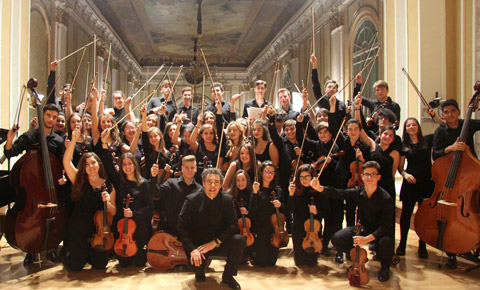 The Youth Orchestra Promúsica of Málaga are created in 2010. This orchestra is formed by musicians who are between 11 and 16 years old and belongs to Orchestral Project Promúsica of Málaga, which is an orchestral training program for young string players created by violinist and pedagogue Javier Claudio Portales. This program, which consists of three string orchestras of different levels and ages, is supported by the Association Promúsica of Málaga is sponsored by the Málaga Musical Foundation. Aims to provide support, training and musical stimulus currently more than ninety children and young people 6-26 years. The most striking feature of the project is that older students help as volunteers in the formation of smallers, creating a very special interweaving all. Promúsica has become one of the cultural identity signs of their city, in which has been doing since its foundation an intense activity that exceeds in just nine years 200 different authors and more than 250 concerts in Spain and other Important Europeans Festivals (France, Italy, Portugal, Czech Republic, Slovakia and Austria) and others cities by more than 200 different authors. The orchestras of Promusica Proyect also makes chamber music, educational concerts, ballets, with choirs and youngs national and international soloists, and even collaborations with international musical personalities as the baritone Carlos Alvarez or violinist Simon Fisher. The orchestra also performs charitable work, collaborating with good cause and institutions. The orchestras of the Promúsica project have won the following prizes: Málaga (Orfeo 2015 and Muestra de Jóvenes Intérpretes -Honorary Mention- 2014), Vienna 2015 (second prize), Prague 2016 (first prize), Bratislava 2017 (first prize). They have recorded three CD including Spanish music. These recordings are also found on global world web portals: Itunes and Spotify. There have also been several world premieres. The Project orchestras are integrated into the international cultural organization UNESCO. Every year in June, the association organizes the Campus Promúsica. In the coming months, the orchestras of the project have provided various international performances in important European Festivals. 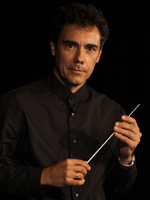 Violin Professor at the Superior Conservatory of Music in Málaga, Dr. professor in the department of Music Education at the University of Málaga, artistic director of Promúsica Project, coordinator of Campus Promúsica and radio music collaborator. Javier Claudio Portales studied violin in Spain, Luxembourg and Austria, obtaining the highest grades, Extraordiari Award Grade and the II International Violin Grand Prix of Spain. He has studied with violinists from the likes of Igor Ozim, Michael Grube, Bretislav Novotny, T. Adamopoulos, Anna Baget or Agustín León Ara, among others. It has integrated various symphony orchestras and chamber as tutti, concertmaster and soloist, and various chamber ensembles (duo and trio), with concerts in Spain, Algeria, France, Italy, Denmark, Austria and Germany. As a teacher, has a history of nearly three decades in which he participated as a speaker at international conferences and has given lectures, and courses for students and teachers throughout the country (Almería, Huelva, Granada, Murcia, Ibiza, Madrid, etc). He is the author of several articles in professional journals and about twenty books and books with different publishers on learning the violin that are distributed and implemented in various Spanish-speaking countries and the US. He was appointed by the Government of Andalusia as editor-rapporteur of the LEA (Law Education of Andalucía) to the basic teachings of music in Andalucia. He is Doctor from the Department of Education in the Faculty of Education of Málaga and is a member of the research group "Albatros". He has served on the jury of various competitions such as “Angeles Reina”, Young Musicians of Ayto Malaga or Muñoz Molleda (Cádiz). He recorded an Compact Disc with the Chamber Orchestra “Rosa Faria”, who created and directed for ten years with concerts in and out of Spain and three Compact Disc as Director of Orchestral Project Promúsica of Malaga. He has also directed several meetings to Cuenca Youth Orchestra, Allegro Chamber Orchestra of Andújar, Academy Orchestra of Lisbon and International Orchestre of Eurochestries Festival. For his important professional career he was awarded in 2016: “Ensign of Honor” –Málaga Musical Foundation-.