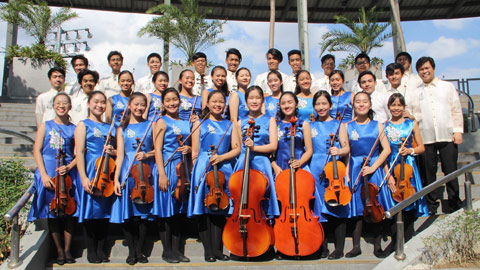 The Manila Symphony Junior Orchestra (MSJO) is an internationally-awarded youth orchestra from the Philippines, having won 2nd Prize at the 11th Summa Cum Laude International Music Festival held at the Golden Hall of the Musikverein in Vienna, Austria. They also performed in concerts at famous concert venues in Vienna, Salzburg, Prague and Munich. The group was formed in 2014 as the youth orchestra project of the Manila Symphony Orchestra Foundation, Inc. (MSO). They are composed of students aged 10-21 years old from the MSO Music Academy and qualified young string players from all over the Philippines. Since 2015, the MSJO had embarked on outreach music camps called "Summer Out There" where they bring the joy of music making to people outside the Metropolis- locations included Puerto Galera, Baguio City, and Tagaytay. The orchestra made their formal debut at a concert at the Cultural Center of the Philippines (CCP) in 2016, which  sparked a fundraising campaign to build the MSO Recital Hall in Circuit, Makati which is now MSJO's home-base. They are regularly featured in MSO's Rush Hour Concert Series at the Ayala Museum and at the Filfest Music Festival in Alabang. They continue to train under the direction of Mr. Jeffrey Solares, Ms. Sara Maria Gonzales and Mr. Arnold Josue. This July 2018 they will again make their way on a European Concert tour, where they will compete and perform at various concert venues in Vienna, Bratislava, Venice, Florence and Rome. The MSJO is under the principal patronage of Standard Insurance Inc. as part of its corporate campaign "in pursuit of excellence,” with a program that seeks to discover, nurture and promote the musical talent of Filipinos and give them an opportunity to shine on the international stage. 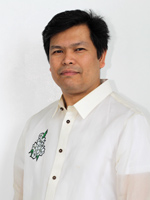 Jeffrey Solares is the executive director and associate conductor of the Manila Symphony Orchestra (MSO) and is one of the most active figures in promoting classical music in the Philippines through his multiple roles as arts advocate, violinist, conductor, educator, music arranger, concert annotator and orchestra leaders. With his belief in the importance of the arts in developing a nation, he helped re-organize the MSO into an entity capable of sustaining its artistic mission with the support of various individuals and corporations. Since then he has spearheaded MSO’s Annual Gala Concert Series in major concert venues around Metro Manila. In 2013, he initiated the MSO Rush Hour Concerts at the Ayala Museum to develop a fresh audience for music from among those who live and work within the Makati business district. In spite of the challenge of operating without steady support from both local and national governments, he has enabled MSO to continue pursuing its mission to enrich the cultural life of the community through its various artistic and educational programs. In 2014, he helped establish the MSO Music Academy, now one of the leading training centres for aspiring young musicians with over 200 students in three studios around Metro Manila. He also founded the Manila Symphony Junior Orchestra (MSJO), a youth orchestra composed of some of the country’s top young musicians. The MSJO has already won 2nd prize at the 11th Summa Cum Laude International Music Festival held in Vienna, Austria in 2017 and has given concerts in Salzburg, Vienna, Prague and Munich.