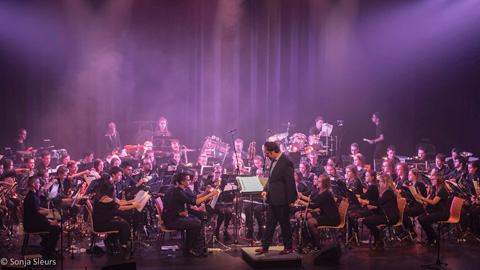 On January 8, 1977 the wind orchestra emerged from Nico Neyens’ class ensemble . It was a means to give the incredible number of students the chance to make music together. This formula quickly proved successful. The wind orchestra became the house orchestra of the European Music Festival for Young people in Neerpelt and later also ambassador of this Festival, which took them far beyond European borders. The orchestra has been on concert tours to Germany, the Netherlands, France, England, Spain, Italy, Czechoslovakia, Estonia, Latvia, Hungary, Sweden, Denmark, Finland, Norway, Poland, Bulgaria, Switzerland, ... but also Russia and even South Africa. In the many EMJ competitions this orchestra has participated in, it has been highly successful ,with a 1st prize SUMMA CUM LAUDE in 1997 and in 1999. Under the inspiring leadership of Nico Neyens, an LP was recorded in the eighties and the CD "Ouverture to a new age" in 1997 for the 20-year jubilee of the orchestra. The harmony orchestra had the honor to perform for His Majesty King Baudouin I in 1991 in Genk and  has accompanied Will Tura (2000), Belle Perez, Maarten Cox (2007)  and many moreduring the Neerpelter Proms. In the meantime, Nico Neyens passed on the baton to Bert Minten in 2002, who in turn passed it on to Tom D'Joos in 2008. Every year the orchestra still tries to develop special projects like their  fairy tale project "Once upon a Time" with students music, theatre and dance from the Kunstacademie Noord-Limburg in May 2016.  On 7 October 2017 the project "Brell & Brass" with Micheline Van Hautem was another major success. The great success of this orchestra is surely based on the music as well as the friendship among the young musicians, the passion of all those involved, and the excellent management of the teachers and the academy. 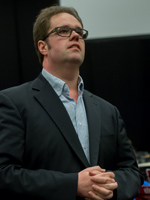 Tom D’Joos was born in Lommel (Belgium) in 1976. At the Royal Conservatory of Ghent he obtained a Master Degree in Saxophone (with Willy Demey and Rik Vaneyghen). During his stay in Ghent, he became interested in conducting and attended the conducting-course with Dirk Brossé. Afterwards he enrolled at the Conservatory of Maastricht and received a Bachelor in Wind Band Conducting, with the well-known Dutch conductor Jan Cober. Later he got his Master Degree in HAFABRA-conducting at the Lemmens Institute (Louvain) with Jan Van der Roost and Edmont Saveniers. He also attended masterclasses with Pierre Kuypers (the Netherlands) and David King (Australia). Today, Tom is a full-time teacher and conductor at Kunstacademie Noord-Limburg (Neerpelt - BE). He teaches saxophone, chamber music and conducts the school’s windband.